Today's walk started from Millhouse Green, to the west of Penistone and only about two and a half miles from the Peak District boundary. I walked along Lee Lane and then took the path that leads down to the TransPennine Trail, where I stopped to eat my sandwiches at the site of Hazlehead Station, or Hazelhead Station, however it's spelled.

At this point the route of the TransPennine Trail is used to mark the boundary of the national park.

I heard these wasps before I saw them. 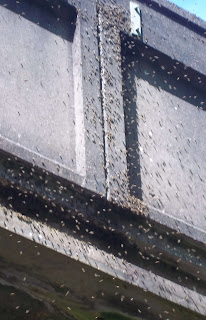 Many of the views along this section are spoiled by pylons and power lines. 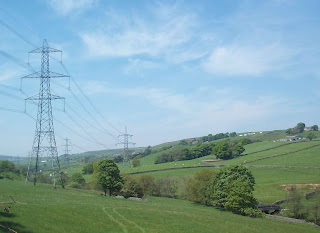 I stayed with the trail until I reached Dunford Bridge and briefly set foot within the boundary of the Peak District National Park as I went to explore Winscar Reservoir; it's not possible to walk all the round the shore though because the land is owned by the sailing club. There are sheer cliffs on the far side and so I suspect it's actually a flooded quarry. 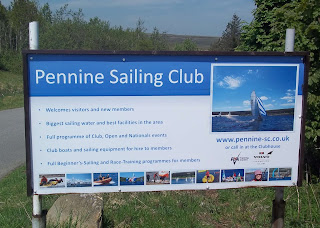 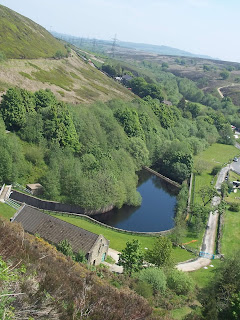 I then headed north along a minor road, a short stretch of footpath, and then another minor road to reach a crossroads right next to the Kirklees boundary.

I turned right and passed to the north of Carlecotes and then took a route that went next to an old spoilheap. I continued walking in an easterly direction, passing quite close to the wind turbines on Royd Moor and struggling with a footpath which the landowner had attempted to block by bricking up the gaps in the walls where the stiles were and placing barbed wire across. Because of the timings of the bus departures I had to walk all the way to Penistone and catch a bus back to Barnsley from there.

I'm not sure if the sign refers to a location or just a property near Millhouse Green. 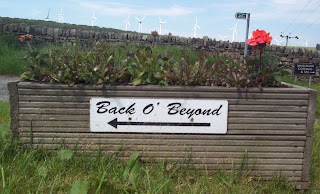 Email ThisBlogThis!Share to TwitterShare to FacebookShare to Pinterest
Labels: Back o' Beyond, Kirklees boundary, Winscar Reservoir