Unfortunately there are are no photographs to accompany this post; my camera battery was flat. It was cloudy and drizzling all day so I doubt I'd have any decent pictures to post anyway.

The walk began at Hathersage Booths, where The Millstone Pub is located. I walked down the path, across the fields and crossed the railway line, then walked along a well-maintained path to Leadmill Bridge. Continuing along the bank of the River Derwent I soon arrived at Shatton, a village where most of the houses seem to be rendered with white plaster.

I had planned to walk to Hope or even Castleton, but because it was so muddy along the next stretch I lost the route of the path and ended up in a very boggy area of woodland which really delayed me. Once I'd traversed this it wasn't far to Brough, and I knew that if I hurried up I'd be able to catch the bus back to Sheffield. By this time my piles were very sore so I was glad to call it a day - I still managed nearly six miles though.
Posted by Lee Firth at 3:44 PM No comments:

I got off the Bakewell bus about a mile south of Baslow and soon found the path going up the hill and over the fields to Pilsley, one of the pretty nineteenth century                 Chatsworth Estate villages.

I walked through the village and after a few hundred yards came to a footpath which led across meadows back to the Bakewell road, and then through a wooded valley to Hassop. 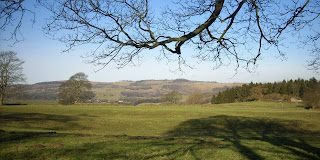 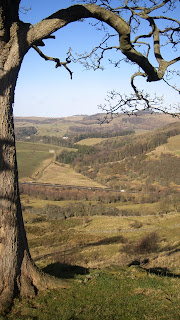 There's a very impressive hall in Hassop which I've noticed when passing on the bus, but today was the first time I'd actually visited the village, as it was the case with Pilsley...and Bubnell later on.

The next part of the route was walking along the ridge above Bank Wood; at times the views were quite restricted - which wasn't really a problem since there was a large quarry on the other side of the valley which isn't shown on my Ordnance Survey map.

I had intended continuing to Calver and then walking along the Derwent Valley Heritage Trail back to Baslow but the descent down into Calver looked quite steep, and I had a twinge in my right knee. The path across open fields down to Bubnell seemed the safer option.

I soon arrived at Bubnell, then crossed over the river to Baslow, where I didn't have too long to wait for the bus.
Posted by Lee Firth at 4:41 PM 2 comments:

The weather was rather cloudy today and so I chose a walk that included a lot of woodland on the Chatsworth Estate; areas where I haven't been walking before.

I got off the bus at Baslow Nether End and walked over the old bridge, past the thatched cottages and into Chatsworth Park. Instead of taking the path which runs next to the river, I headed uphill towards Dobb Edge and the woods which are above and behind the house.

After wandering around for about an hour I located my first destination; a ruined aqueduct which used to supply water to Chatsworth House. As you can see from the photograph there's a long way for the water to drop now. 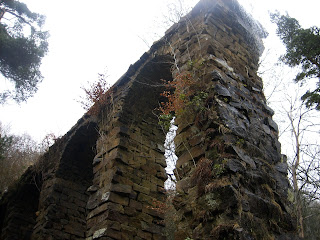 A bit further up the hill there are two very nice cascades, the photo is of the higher one. 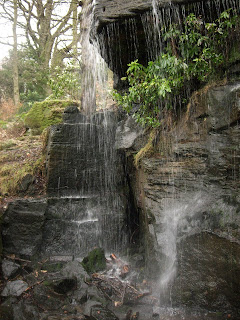 A few hundred yards further along the track I reached the Hunting Tower; apparently I had walked pretty much straight past it earlier without noticing. 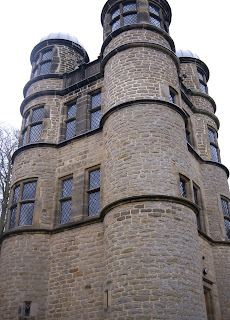 It was then an easy couple of miles back down into Baslow, apart from the highest ladder stile I've ever come across. 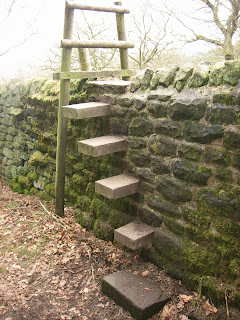 I hadn't walked the majority of today's route, which always adds a little bit of extra interest. Of course it meant that I didn't get a close-up view of Chatsworth House, but I've seen it plenty of times before; I haven't paid to actually go inside the house...I'm not interested. The formal gardens are supposed to be very impressive though, with the Emperor Fountain and the various water features.
Posted by Lee Firth at 4:14 PM 2 comments: