A long title for today's walk; although the walk wasn't particularly long at six and a half miles.

The day got off to a bad start with the train being delayed for fifteen minutes due to a problem at Rotherham; then when I arrived at Sheffield Station I went for a pee and noticed a sign which said that because of vandalism, barriers were going to be installed at the toilets...and there would be a charge of twenty pence. Having to pay is bad enough, but it's the delay caused by the barriers that will be the main problem - it's a railway station, many people are likely to be in a hurry and they don't need any extra, unnecessary delays.

I got off the bus today at Eyam and quickly walked across the meadows to Stoney Middleton, and then continued through woodland and across more meadows to reach the River Derwent a few hundred yards south of Froggatt. Along this section of the walk I came across a couple of fields where a lot of yellow flowers were growing - I wonder if anyone can identify them? 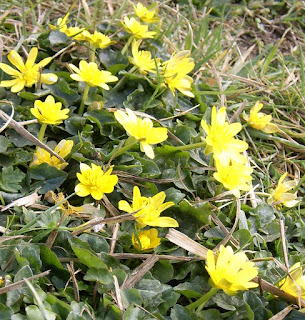 There were some lovely views to the north as I walked along the riverbank. 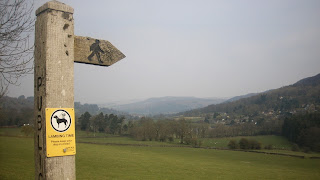 The walk to Grindleford was straightforward; I've done it several times before. At Grindleford though I took an unfamiliar route climbing up through boggy woodland to eventually reach The Grouse Inn.

About a mile further on I arrived at the Longshaw Visitor Centre and popped in for a cream tea, since I'd got plenty of time to spare. It was lovely, and I was ready for it; but I thought it was rather expensive.

It was then only a short walk to the bus stop at Fox House. I had thirty minutes to wait for the next bus and so spent a few minutes sunbathing on a rock.
Posted by Lee Firth at 5:37 PM 2 comments:

Just a short visit to Castleton today with my friend Justin; we needed to be back early because he is the full-time carer for his mum and he had to be back home before his mum returns from the daycare centre.

Justin wanted to visit the castle, but because of his limp he wouldn't have been able to make the climb. 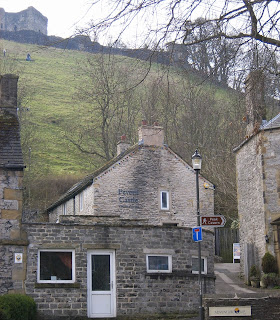 Monday is possibly the worst day of the week to visit Castleton; several of the shops were closed after opening yesterday...and of course it's market day at Bakewell.

Nevertheless Justin enjoyed looking around the craft shops and I took a few photographs in various parts of the village. 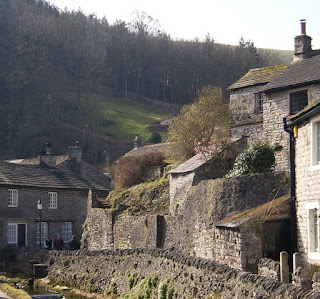 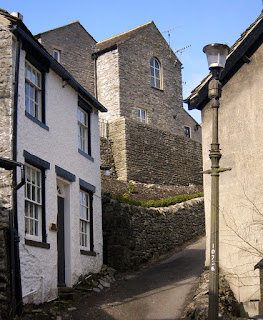 We then went to a pub for lunch. We both immediately decided to have game pie but were rather disappointed with what was served up; there were no roast vegetables, just chips and mushy peas, and the meat in the pies was rather bland and tough to chew.

We stayed in the pub until the bus was due. The timetable has recently been modified, and at the time we travelled the 272 took a much longer route, taking in Bamford village and a circuitous route around Sheffield that went everywhere except the railway station. As we got off the bus at the bus station I told the driver that I wasn't impressed with the new route. He did not reply to my comment.
Posted by Lee Firth at 3:56 PM 6 comments:

I originally hadn't intended going walking today: I'm glad I did though because the weather turned out to be very nice. 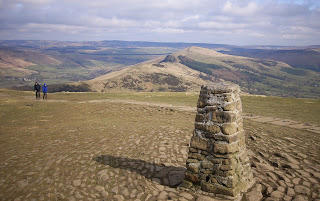 Yesterday, today's weather forecast wasn't very promising; but when I checked online this morning it said a band of rain followed by sunny periods coming from the west - so I decided to go to Castleton; as far west as the 272 bus goes.

It was raining when I reached Sheffield, but was already dry by the time I'd got off the bus at my journey's end...and within the hour the first breaks in the cloud were observable.

I left Castleton and walked across the fields at the back of the village and then climbed up to Hollins Cross, the lowest point on the Great Ridge. I then continued westwards along the ridge to Mam Tor, then descended along footpaths which I haven't used before and took a photograph of Mam Tor from a different angle. 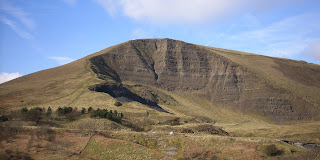 Finally, I walked along the road back to Castleton, enjoying good views of Winnats Pass. 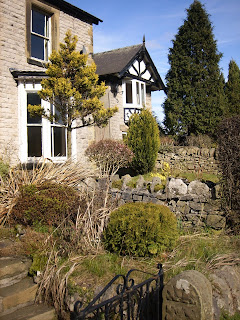 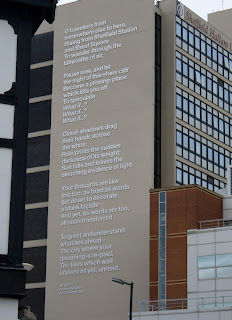 I've started today's blog entry with a photograph I took whilst waiting for the bus, not very far from Sheffield Railway Station. If you click on the image it will be large enough to read the poem on the side of the building. Just a few yards behind where I was standing there is a very interesting water feature, which I shall take a picture of when it's sunny and there aren't many people about.

The walk began at Fox House. As soon as I'd crossed the road something caught my attention: an amber strobing light on top of what looked like some sort of electrical switchbox. It was a few yards from the main building of the Fox House Inn, and probably had something to do with the premises. I have no idea what it is, and I've never seen anything like it before, and have never noticed it at that location previously.

I was soon walking in the Longshaw Estate, and after a few minutes arrived at a popular stretch of the Burbage Brook. 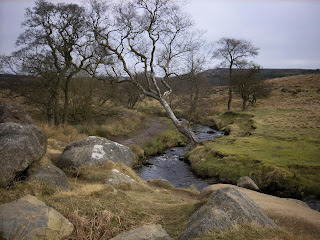 On a hot afternoon in summer hundreds of people will be enjoying paddling in the cold water, playing games with their children and pets, eating ice cream...and doing pretty much everything you'd do on a beach. Even today there were half a dozen families there.

I then meandered towards Owler Tor and then crossed the road and passed Mother Cap and Over Owler Tor and took the path to the west of Carl Wark and Higger Tor.

Navigating along footpaths that went through, or adjacent to, several farms and large impressive houses I eventually arrived at Hathersage, where I'd got time to purchase a large cream cake and a carton of milk, which were consumed on the bus going back to Sheffield.

I only covered five miles today, which isn't too bad though considering I was diagnosed with bronchitis last week, something that I've probably had for the last three years: no wonder I've been gasping going up some of the hills.
Posted by Lee Firth at 3:41 PM 2 comments: