Another walk to Cantley Park today which involved a lot of just sitting in the sunshine and contemplating things...there's a lot on my mind.

I went via Lakeside, at the water's edge it was looking quite tropical.

I walked past the parish church at Cantley - it's in the middle of a housing estate. 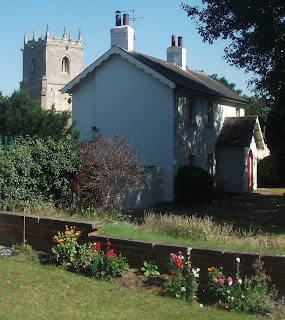 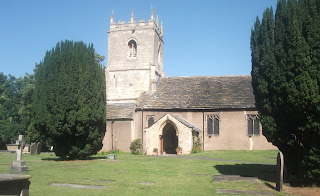 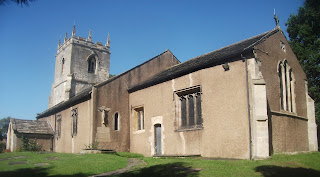 I carried on to Cantley Park, which is a quite extensive area of fields, pastures, and woodlands, with many footpaths...I found a couple of new ones today. 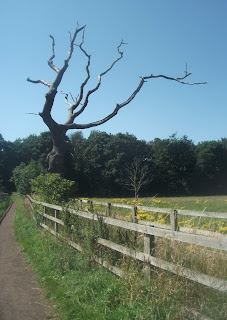 I returned home by going through Sandall Beat Wood; I spent quite a bit of time sitting on the grass at this location on the edge of the wood dreading what new tyranny might be imposed on us HM Government.

A walk to the highest point of Bentley Community Woodland and then a down to the lake. I got there by using sections of the Doncaster Greenway for part of the way; it's a longer route than just going up the road, but it's more scenic. I still needed to walk along Jossey Lane at Bentley until I reached the footpath that goes right next to the park and then continues along the route of an abandoned railway line to the community woodland. 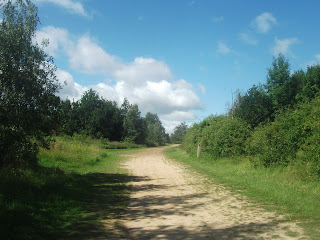 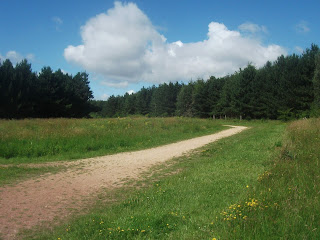 There's an industrial sculpture on the summit. 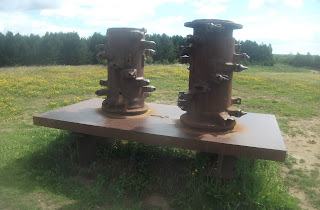 I read somewhere that the lake, which is artificial, is in the shape of a bird...I couldn't tell from walking most of the way around, neither from studying the map...it must have partially silted up and changed shape. 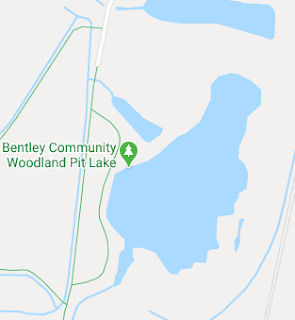 I returned home straight down the A19 road...there's no other way.
Posted by Lee Firth at 1:42 PM No comments:

For a change I walked out to Sprotbrough on the left bank of the river, passing through the hamlet of Newton. 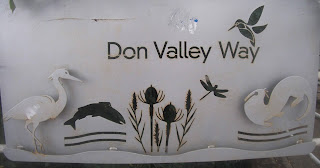 I'd been walking along the Don Valley Way for less than a mile when I reached a spot where until a few years ago there used to be a bridge, and a footpath which would pass right by the River Cheswold, at only two hundred yards in length it's supposedly the shortest river in England - it connects the two divergent channels of the River Don. 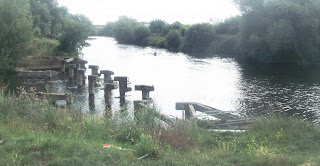 I only saw two cats at Newton, I usually see several more.

The ragwort was spectacular today...and there was a lot of it. 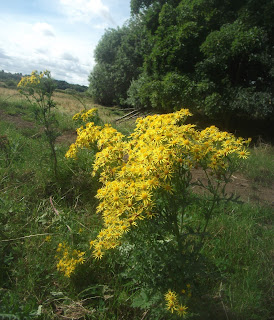 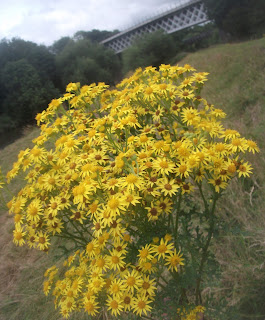 When I reached the Boat Inn at Sprotbrough , instead of continuing on the TransPennine Trail upstream towards Conisbrough I walked up Nursery Lane to find the path that goes up onto the meadows. I spent a few minutes photographing the wildflowers and then returned to Nursery Lane. All of my photographs of wildflowers were out of focus; I think this camera needs something framed in the distance so that it can focus on close-up subjects. 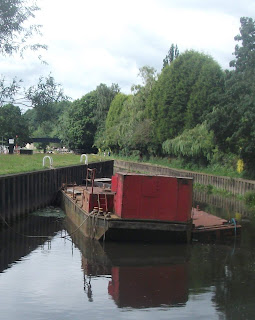 Two boats were passing through the lock.

I then took a path up through the woods that I'd not used before to reach the higher part of Sprotbrough and headed north out of the village along Spring Lane and then east along Long Lane and Back Lane, talking a longer route to Cusworth Hall and then the shortest route back home using Anchorage Lane and North Bridge. 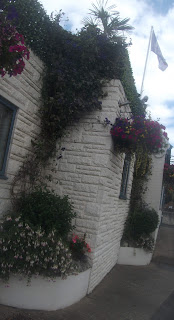 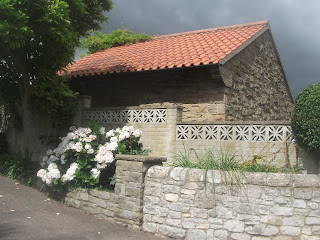 My approach to Cusworth Hall Country Park was through the gatehouse. 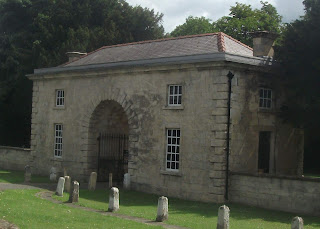 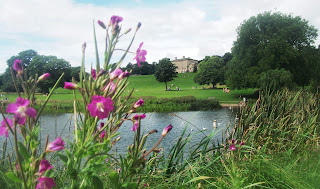 To The South Of Rossington

There's a large area of open land to the south of Rossington that's accessible to the public and this was the destination of my walk today. There are some industrial or military ruins there and yesterday I spent quite a bit of time online studying old maps to see if I could find out what they were, but nothing showed up.

I got there by walking to the Lakeside area and then continued along the Doncaster Greenway and the  path that passes through Doncaster Golf Course and then  crosses over the River Torne. 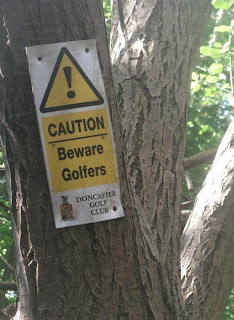 I spotted a squirrel on the fairway - maybe that's a new golfing term I've just learned.

I stopped to photograph the church at Rossington and then headed down  a snicket towards some playing fields and then the area of open land. I visited this area on an earlier lockdown walk a few weeks ago and wanted to return to explore it further. I wandered along the various paths, passing through heath-like countryside, grassland meadows, woodland, and a duck pond...I also went back to photograph the ruins I'd noticed at the time. There are a lot of paths in the area and so I will be returning to explore more of them. 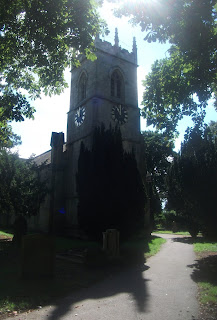 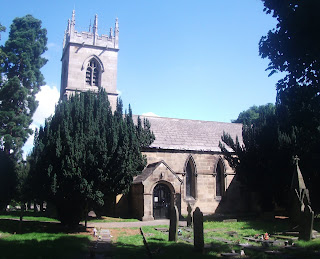 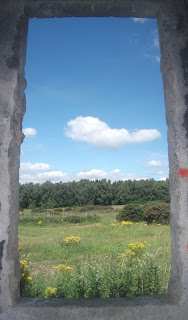 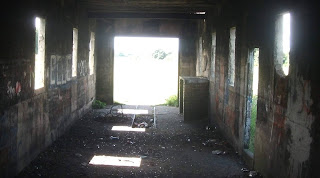 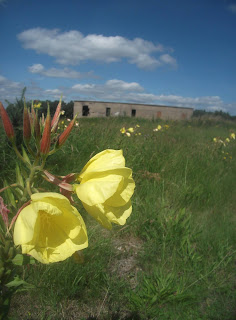 I reached as far as Rossington Hall, now operating as a country hotel, before I headed back home, returning on a more westerly route. 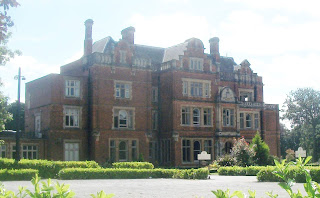 I walked through the village and continued to use a route that goes further west until I reached a point where I hoped I'd be able to take a short cut towards the pedestrian level crossing at Bessacarr. Now that I know where this path is, and where it goes to, it will be very useful for future local lockdown walks.

UPDATE: I've been informed that the derelict building I photographed is the loco shed for the narrow gauge railway that used to operate in the gravel quarry that was located there. Cheers Daniel!

UPDATE 2: I've now been informed that the smaller structures nearby are gun emplacements, as I thought they might be.

The first photograph I've included today was taken looking back towards the racecourse grandstand as I approached Sandall Beat Wood.

I walked through the wood and then used the footbridge to cross the railway. There are a lot of steps to climb because it's very high and I wonder why this might be; the railway has never been electrified. Just beyond the wood I had to turn back after nearly a quarter of a mile because the footpath veered sharply to the left and I wanted to go to the right.

There were plenty of wildflowers in this area for me to photograph. 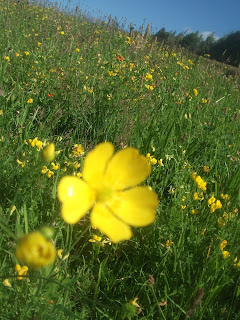 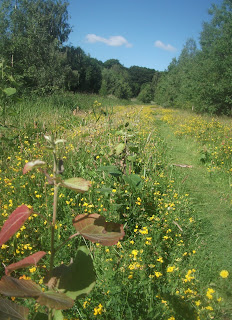 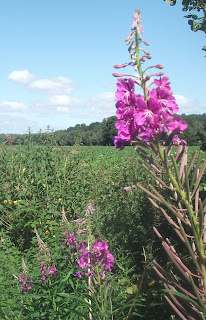 I made my way over to Cantley Park and found a different route to reach Nutwell Lane, visiting some areas of the park that were new to me.

I headed south towards Old Cantley but turned down the road that goes to Branton. I walked through the village and found the footpath which eventually goes across some quite nice countryside and a pedestrian crossing over the railway line, a different railway line this time.

My route home took me through a very nice housing development at Bessacarr and along the Doncaster Greenway to the Lakeside area, and finally through an industrial area.
Posted by Lee Firth at 3:22 PM No comments: