Today's walk didn't get off to a good start. I'd only taken about a dozen strides after getting off the bus at Blackwell Crossroads when I fell over because I was concentrating on zipping up my jacket, and not on where I was putting my feet. Not being able to multi-task is more of a disability than some people might imagine.

I walked along the road and soon reached the strangely-named hamlet of Priestcliffe Ditch, then continued further down the road, and then along a footpath which went along a pretty dale at the bottom of Priestcliffe. I therefore bypassed  most of the village, but I did walk by one old farm building which had dozens of rusty horseshoes incorporated into the stonework: I should think that was done to bring good fortune.

The route I took than briefly climbed up a farm track and then across open fields to the lovely little valley of High Dale. The last time I walked along here I commented that because it was a dry valley it reminded me of the countryside of the Yorkshire Wolds: that wasn't the case today though, since there was a quite substantial brook flowing along the bottom of the valley, right where the footpath is.

At the end of the valley there's a track which leads to Brushfield.  Just before I reached this hamlet a small group of motorcyclists was gathered. Their vehicles were muddy and it was obvious that they'd just ridden along the byway which was the next part of my walk. Two of them appeared to glour at me, so I gloured back, subconsciously making a growling noise. The riders have a legal right  to use any byway in the Peak District, but their vehicles must be road legal at all times. Quite often the number plates on trail bikes are obscured by mud, therefore meaning that the vehicles aren't roadworthy...an excellent revenue raising opportunity I think, by imposing on-the-spot fines.

A few hundred yards later I took the path that goes down through the woods to Lees Bottom. I was impressed by the degree of coppicing which had been done, on quite steep and inaccessible slopes. 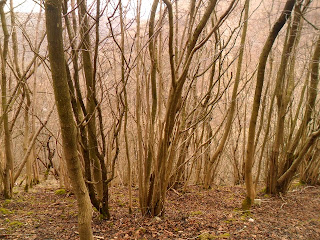 There was a short stretch of path along the bank of the River Wye, then I crossed the busy A6 road and then went to the toilets located in the parking area. These toilets are composting toilets, and so there's no flush; however, there's no water used at al. The urinals seemed to have some sort of hydrous gel to soak up the urine...and there wasn't a sink. 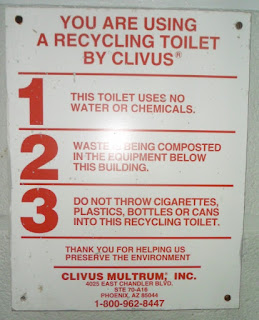 I only needed to have a pee, but had a quick look inside the cubicle anyhow; however, when I noticed this strange device hanging by a piece of string directly over the urinals I quickly returned to the cubicle. It looked like some sort of long-abandoned hospital drip with some squeezy, oozing stuff at the bottom, then some brown liquid in the middle, and possibly some noxious gas at the top of the bag.

I gave it a poke...but didn't stand underneath it. 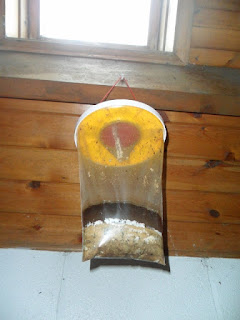 As I've already mentioned, there isn't a sink...or a hand drier, only a hand sanitiser dispenser...however, the instructions say 'ensure hands are clean and dry.' My hands were covered in mud; I still used the sanitiser though, but I probably made matters worse by sealing in any bacteria that I had on my skin. 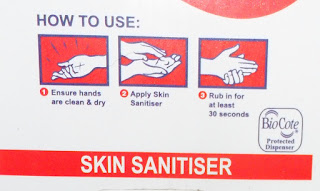 It wasn't long until I reached Deep Dale, nothing out of the ordinary at this time of year, but in the spring and summer it is one of the best locations in the Peak District for enjoying wildflowers.

I then climbed out of Deep Dale and walked across grassy field to Sheldon, then down the path and along the road to Ashford-in-the-Water. I noticed that some new tearooms had opened in Sheldon; the timing wasn't convenient and so I didn't stop...they have been noted for future reference though.

The final stretch of the walk was along the river to Bakewell: I was brave enough to approach quite close to the alpacas that live in one of the fields...they are quite tall, so maybe they are actually llamas. 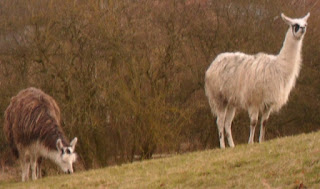