The day started with me knocking over a display of leaflets in the café in the town centre where I usually have a cooked breakfast when I'm walking mid-week, prior to leaving for the railway station to catch the train to Sheffield. If I'm going to have an accident when out on a day's walk, a café is as good a place as anywhere I suppose.

When I reached Matlock I got off the bus at Hall Leys Park to visit the toilets. There are some more public toilets only a couple of hundred yards away at the railway station, but by starting my walk here I was able to take this photo of the fountain. 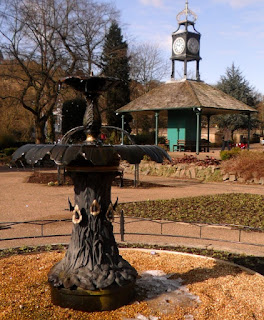 I walked over the bridge, up the steep road at the side of the station, and through the gate which marks the start of the Limestone Way: it could be better signposted, but it's an impressive sight which greets your eyes - beautiful limestone grassland. The first few yards are quite steep; but you can always stop for a rest and turn around to enjoy the impressive views of the town.

I continued along the Limestone Way for about a mile, all the while the views of the Derwent Valley were opening up as I steadily climbed. I then took the track which leads down to a road, not too much a loss of altitude though...and then continued along the tarmac for about fifteen minutes until I reached the next path, heading in a northerly direction across fields.

At this location I was quite high up and there was still some snow about, and this snowdrift near to a stile looked to be quite deep. 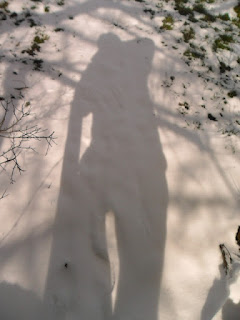 Fortunately I didn't get to find out how deep, because the snow was still frozen so my boots only sank in a couple of inches. It did present me with the opportunity to take an unusual self-portrait though.

The views of the Derwent Valley were still lovely as I approached, then descended into, Wensley Dale; spelled using two words in Derbyshire...unlike the  valley in Yorkshire.

There was then a short climb up a track into the village, where I observed that nearly a quarter of the properties were for sale or to let.

The climb out of Wensley and then the descent into Cambridge Wood were easy enough. Later, as I approached the Enthoven factory/mill I noticed some substantial ruins of an old mine engine house. Like the locations of several other industrial relics in the Peak District it isn't depicted on the Ordnance Survey map. 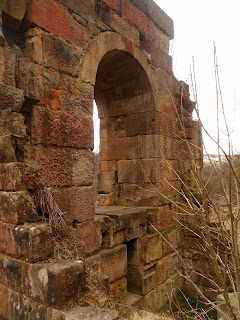 The hamlet of Warrencarr was next, and then I took the road up the hill to Stanton Lees, followed by a path, but probably not an official public footpath; because, even at this time of year it was very overgrown with moss and rhododendrons ..and a lot of fallen branches, and debris from small landslips.

Today's final photograph is of Stanton Woodhouse, which I captured with the sunlight at just the right angle.

I arrived at Rowsley with a few minutes to spare; the bus arrived about five minutes early though. Maybe the driver thought it was a Sunday, when it should be at Rowsley at that time.

When we got to Baslow Nether End we thought the driver might be confused again. He drove around the green as though he were going to Chesterfield and one of the other passengers sought re-assurance that he was indeed going to Sheffield.

The reason for using the other bus-stop was that two delivery vans were blocking the normal access route: so the bus had to reverse and then continue as normal to Sheffield.
Posted by Lee Firth at 6:29 PM