There's a substantial area of woodland, a landscaped former colliery spoilheap and the more open landscape of Cantley Park just beyond the racecourse. Much of this area I haven't explored and so that's where I went this morning.

To get there I needed to pass through my local park; it's actually quite attractive.

There were quite a few people out at this time, a couple of hours later than I normally do my daily exercise walk; mainly dogwalkers and joggers. I heard a loud high-pitched shrieking noise coming from one family group and didn't know if it was the toddler or the chihuahua.

There was one section of the walk I particularly enjoyed; quite close to the houses at Cantley there's a heath-like area which seems to be an old abandoned orchard - certainly there were quite a few fruit trees there...and the blossom was lovely.

This was the only other photograph I took today, it's at the back of The Dome sports centre...it's something to do with the heating, the freezing system for the ice rink or the air conditioning I should think. 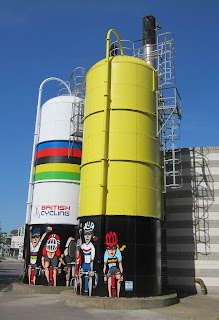 I decided to go a bit further for my local exercise walk this morning, all the way to the Amazon.... the Amazon Distribution Centre, about three miles from my home.

I headed out past the Lakeside area and caught a spectacular sunrise over the water. 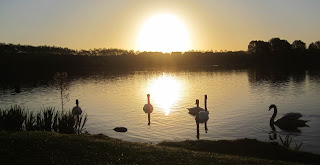 Just beyond the Lakeside area I took a path which leads to some quite open countryside, mainly meadows and woodland; I call these flowers that I photographed whitebells, but I've also heard them called 'white bluebells'...there were a lot of them. 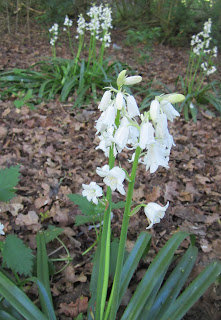 I crossed over two railway lines and under a motorway and a dual carriageway until I reached the furthest point of my walk. I was hoping to find I way back to Lakeside without going back the way I'd just come but ended up taking two dead-end footpaths and so abandoned that idea. I didn't have a map, I don't have an up-to-date map of my local area and didn't print out an online copy yesterday.

I returned to Lakeside and completed my circuit of the lake and arrived home at 9:30, quite a bit later than planned, meaning that I missed my daily Facebook group chat with my family and friends. We schedule it at this time so that it's convenient for my sister who lives in Australia.

My thigh muscles are aching a bit, so I'm assuming I'm not as fit as I was before lockdown.
Posted by Lee Firth at 10:46 AM No comments:

My first six virtual walks have featured the areas of the Peak District that I could have reached by travelling on the X71 bus rom Sheffield. I would have been able to get to the start of today's Google Street View virtual walk by catching a bus from Doncaster. When I was planning this walk it wasn't my intention that in some way it would become another of my featured walks, but when I noticed on the map that towards the end of the route there were several farms with names featuring trees or bushes I had to include it.

The plan would have been to travel on  the Selby bus to Chapel Haddlesey and head west out of the village, first taking the road and then a footpath which crosses over the Selby Canal. I'd then be walking in a northwesterly direction  until I reaching Gateforth and passing near to the hall, which is now an hotel; a few yards further on is Hambleton Hough, a wooded hill.

I would have walked down the road to Hambleton, same as is the case with Gateforth there doesn't appear to be a parish church there. There's a complicated railway junction just north of Hambleton and the footpath has to cross three busy main lines - it would have meant walking for nearly a mile just to get a few yards closer to Scalm Park, my next intended destination.

It was then over a mile down the road to Wistow and then a rather indirect minor country road to Selby, passing by Sycamore House Farm, Ivy Grange, Laburnum Farm, Mulberry Farm, and Lilac Farm. Surely these names can't be a coincidence? There's also an Elm Tree Farm at Wistow, and the name 'Selby' means 'a farm by the willow tree.' 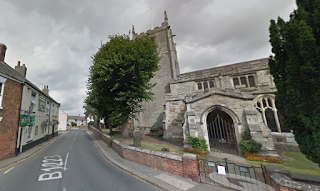 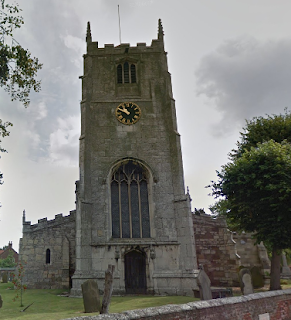 Selby Abbey is a magnificent building, both inside and outside...this was the only angle of it I could lift from Street View though.

Today's virtual walk would have been another one starting from  Hulme End, taking me to the north as I'd be going to Longnor. I would have walked along the road which is a section of the Manifold Way or Manifold Trail [it's difficult to work out which it is on the Ordnance Survey map] and then a footpath, passing just to the west of the hamlet of Brund. Staying on the trail all the way to Longnor  the walking looked as though it would have been easy and I could have made good progress meaning that there would have been plenty of time for me to pop into the tearooms and order a bit of something to eat. 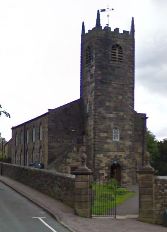 It's definitely the Manifold Trail that heads to the west out of Longnor and I had planned to remain on it until the first opportunity for me to head off to the south and start the return route back to Hulme End.

There are a lot of footpaths in the area I would have been walking and I probably wouldn't have been able to remember  exactly which way I went, but I would have ended up at Warslow and then headed east, finally returning to Hulme End, approaching from the south.

Another Doncaster walker posted a photograph of some bluebells that he'd taken on his daily exercise walk yesterday, so I got around to thinking where my nearest bluebells might be and I decided it must be Sandall Beat Wood, just beyond the racecourse.

There might have been some in the park, but there weren't any. 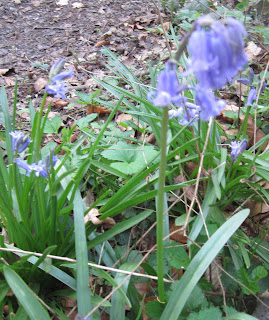 It's still a bit too early in the season - I only found a few in flower and they weren't fully out; it could have been because it was early in the morning though.

I've got bluebells growing in my garden but they won't be blooming for a few weeks yet, I think they're the Spanish variety which probably flowers later.
Posted by Lee Firth at 9:55 AM No comments:

For a change this morning I went to Doncaster Lakeseide for my daily permitted exercise walk; it's a lot more interesting than Town Fields. Some stretches of the walkway are a bit narrow though and I had to pass a bit closer to other people than I would have wanted to at the moment.

The X71 bus would have been stopping outside the entrance gates to the Peak Wildlife Park at Winkhill; I'm not sure how many people would have been wanting to get off there to visit the park for the full day, but it would have been a useful location for me to be able to reach a lot of good walking country in all directions. 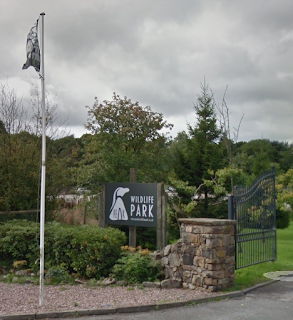 I would have started by walking  over to the southwest, to the church at Ipstones and then continuing to Consall Station on the Churnet Valley Railway. I couldn't find any suitable images of the area to crop though. 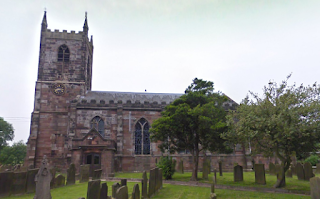 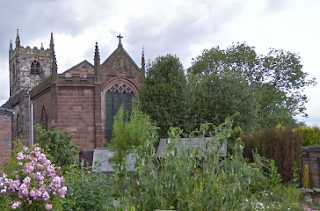 For the next stretch of the walk I would have used the towpath of the Caldon Canal, which flows close to the railway track.

I would have walked up the road at Froghall Wharf and then located a path heading east which comes out onto a minor road in the Upper Cotton area.

There's a church at Cauldon, the next village I planned to visit. I didn't see any other old or attractive buildings in the village though as I walked through using Street View; it's right next to a quarry and what looks like a cement factory.   Finally I would have made my way back to the wildlife park to wait for the bus. 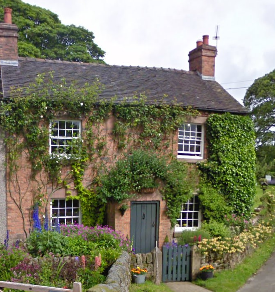 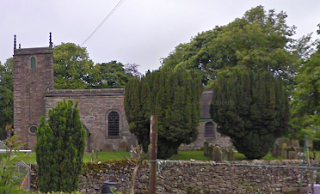 When I was studying the map to work out the route of this walk I noticed that there's a quarry at Cauldon on the site of Caldon Low, the same name as the canal. I wonder if 'Cauldon' and 'Caldon' are variant spellings of the same word?

I like maps, geography in general, and public transport. I use buses and trains to get to the start of my walks and so I got around to thinking about which is the closest railway station to Doncaster that I haven't yet used, and what walks I'd be able to do in that immediate area?

Well, it didn't take much time to work it out; it's Bentley on the line going out to Leeds, less than two miles from the town centre. It's easier for me to travel on the bus there, and I've done all the possible local walks.

So, I then decided to have a re-think and re-define my parameters to be the nearest railway station where there's a good choice of local footpaths that I've not previously used...and the answer is Wombwell, about ten miles away, but not on a direct line from Doncaster.

There's some nice countryside near Wombwell Station. Wombwell is a large area of rolling woodland with a few open spaces - I've walked along a couple of the paths on the edge of the wood when heading elsewhere.  Worsbrough Country Park and Mill is quite  scenic with some nice tearooms. Elsecar Heritage Centre is an interesting place to visit, it's a collection of mainly eighteenth and nineteenth century industrial buildings now used as cafes, craft shops and galleries. There's also a large antiques centre there. It's then a lovely walk up the hill across the fields to Wentworth, a charming estate village belonging to Wentworth Woodhouse, at one time either the largest private residence in England, or even Europe, or the building with the longest continual façade.

There's an extensive deer park on the edge of the village, several interesting follies in the nearby countryside, a large garden centre with formal landscaped grounds, pretty cottages, plus craft shops and a small antiques centre...plus some charming, slightly eccentric tearooms which I've visited a few times. I love the knitted woollen teapots, cups and sauces, and cakes they have on display...as well as other interesting stuff. Their real cakes are delicious, too.

Another one of my Google Street View virtual walks, a walk from Hulme End to Buxton today; I'd planned to start several walks from this location on what was going to a stop on be the X71 bus route.

For the first couple of miles I would have been walking along the Manifold Trail,  going north. When I reaching a location shown as Pool on the map I would have left the trail and headed in a northwesterly direction.

My route would then take me to the north, passing well to the west of Longnor and picking up the Manifold Trail again,  soon leaving it again  though to get to Hollinsclough.

At Booth Farm I would have swung back to the northwest, passing close to Stanley Moor Reservoir and joining the Dane Valley Way for the approach to Buxton going through Buxton Country Park. I would have caught the bus back to Sheffield or Bakewell from the Market Place, or even one of the bus stops further south on London Road and so I haven't included any images of the lower town, where all of the tourist attractions are. 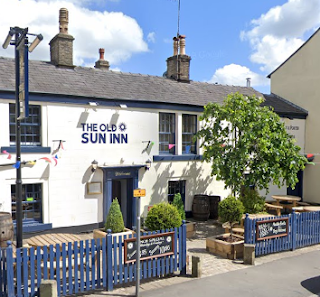 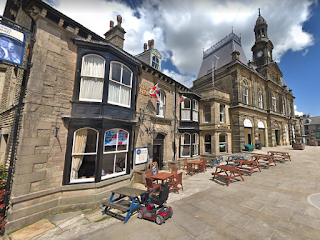 I'm sorry that several of the  photographs that I've generated from Google Street View are a bit similar, but it's the best I could manage...I didn't actually do the walk.