I didn't get much sleep last night due to the hot and sticky weather, and so had to curtail today's walk - I still managed five miles though.

Unusually, the walk began outside the boundaries of the Peak District. Dore Moor is about three miles east of Fox House and probably a bit over a mile from the official boundary stone on Hathersage Road. Being much nearer to the city centre there are a lot more buses serving this stop..

The path went to the north across fields but became quite difficult to follow as it passed by a farm; I had to get my binoculars out to look for a sign or stile up ahead.

I then walked through some woodland which I hoped would take me towards Ringinglow. However the path I took looped round and I ended up at Long Line, a linear settlement consisting of expensive detached houses.

I then walked along the road in the direction of Ringinglow, but before reaching the village turned left onto the track that leads to Houndkirk Moor; by this time I was in the Peak District, but I hadn't noticed a sign.

It was then a straightforward walk across the moor to Fox House.
Posted by Lee Firth at 2:35 PM No comments:

Getting off the bus after a rather unpleasant journey due to a large, noisy school party, I walked in a northerly direction, heading uphill towards woodland. At times there were expansive views though. 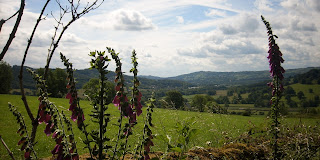 Although it's so close to Chatsworth, this area of woodland is actually part of the Haddon Estate.

I continued along a well defined track in Manners Wood and then turned uphill to reach the grasslands of Calton Pastures. I then descended through a short, steep section of woodland and climbed over a ladder stile to reach the pastures above Edensor.

Edensor is a unique place. It's one of the Chatsworth Estate villages; every one of the houses is different, yet they were all designed by the same architect and built at the same time.

Within twenty minutes I was approaching Chatsworth House. Although it's a beautiful building I didn't take any photographs because an entire wing was covered in scaffolding. For the first time I lingered for a while, not to visit the House or the gardens, but to visit the toilets and pop into the café for a cup of tea.

It was then a leisurely stroll through the parkland back to Baslow Nether End where I caught the bus.
Posted by Lee Firth at 4:30 PM 1 comment:

Today I got off at the same bus stop as I did last week, Baslow Church. This time I walked north along Gorsebank Lane, passing some lovely cottages. 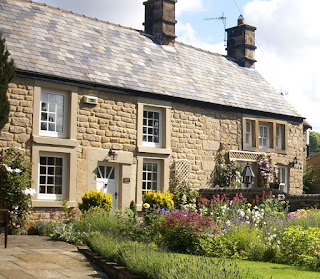 I made quick progress, first reaching Curbar and then Froggatt. The route was fairly flat, mainly along farm tracks, country lanes and across fields; north of Curbar there are stretches of woodland and heathland though. Heathland is quite rare in the Peak District.

I crossed the picturesque bridge at Froggatt; I couldn't quite get in the right position to take a photograph I'd be happy with though.

It was then a bit of a climb up to the Eyam road. As is my habit now, I stopped at the tearooms for some refreshment. After walking through most of the village I took a footpath which led up to Eyam Edge; this being the most difficult part of the walk.

At the top I walked along a limestone track for a few hundred yards and then across Eyam Moor, which eventually leads down to the Hathersage road. This section of footpath is one of my favourites because it goes gently downhill for nearly two miles, and the views of the Derwent Valley and the Eastern Edges are spectacular. Today I was even more impressed with the views since I seemed to have timed my visit to coincide with the peak of the foxglove flowering season. There were hundreds, if not thousands of them, all at their best. 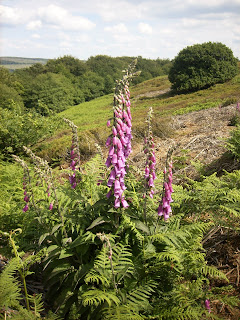 I arrived in Hathersage with just enough time to pop into a shop and get something to drink before the bus arrived.
Posted by Lee Firth at 6:54 PM No comments:

I got off the bus at Baslow church and soon left the village by crossing the old bridge and then walking along an overgrown snicket. As soon as I had arrived in open countryside I noticed something in the distance over to my right. 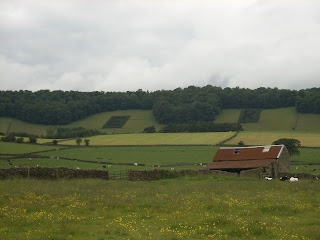 If you enlarge the photo you can see that there are two oblong-shaped copses where some of the trees have been felled to spell out the letters 'E' and 'R' - I will let you draw your own conclusions.

I then continued uphill across the fields and along the road to Hassop. En route I noticed some foxgloves in bloom. These are flowering several weeks earlier  than the foxgloves in my garden; I have noticed this with all the plants in my garden. With me living at low altitude in Doncaster the average temperature is a few degrees warmer than it is in the Peak District and so you'd expect my plants to be flowering earlier, yet this isn't the case...even though my garden has a southwesterly aspect. The only reason I can think for this is that I have a large oak tree in my garden which sucks up most of the available water and leaves most parts of the garden in shade for prolonged periods.

It was only a few hundred yards across more fields to Rowland, a pretty little village situated at the foot of Longstone Edge. 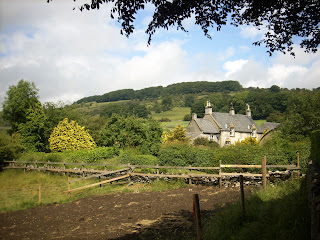 Next I climbed up onto the edge, and was pleasantly surprised how much better my breathing was - I'm hoping I'm finally getting rid of my bronchitis.

The final section of the walk was along Coombs Dale, where there were some lovely displays of wildflowers. 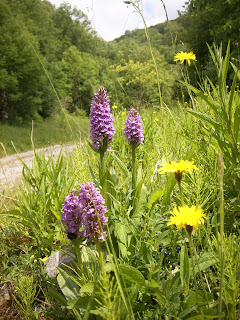 I soon arrived at Calver, where I popped in the café and enjoyed a ten item cooked breakfast in the middle of the afternoon.

UPDATE: I've just received this informative reply from a member of one of the online walking forums of which I'm a member:

Hi there - I live in Baslow - what you saw on the hillside (under what is known locally as Crocodile Wood from its shape) was planted to commemorate the Coronation of Elizabeth II - it was replanted a few years ago. It is not felled trees which create the letters but larch which stand out against the darker trees in the rest of the patch.
Chatsworth did another one to commemorate the Queen's Golden Jubilee (in Chatsworth Park) - this one was done in stone - so far as I know they were made to remove it by the Peak National Park.
Posted by Lee Firth at 4:46 PM 2 comments:

Ashford-in-the-Water, Sheldon, Magpie Mine, Lathkill Dale, Over Haddon and Bakewell. 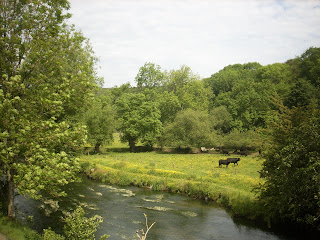 Today's walk was over ten miles in length; the longest walk I've done since starting the blog. I'm feeling really well; it seems the latest dose of antibiotics is being effective in clearing up my bronchitis.

I got off the bus at Ashford-in-the-Water, a village I've visited before, but never had the time to linger since I was always in a hurry to get back to Bakewell. I enjoyed admiring many of the cottage gardens today and lingered a while at the old stone bridge over the River Wye until I spotted a couple of trout.

The walk to Sheldon is a bit of a slog but the views are worth it. I then walked across the fields to the Magpie Mine and spent about twenty minutes exploring the substantial ruins which remain. 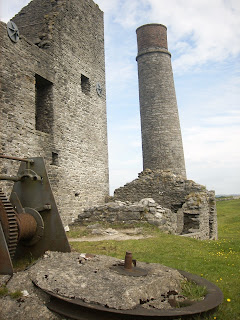 I then navigated to the head of Lathkill Dale near to Monyash and sat down on a grassy slope to enjoy a bit of sun on my face; I was briefly shocked, when, for a fraction of a second, I thought a nearby twig was actually an adder ready to strike. 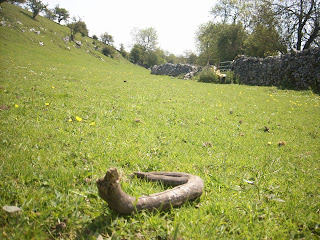 I've not walked along the upper reaches of Lathkill Dale before and it was a pleasant surprise; being quite rocky and reminiscent of Cave Dale near Castleton. 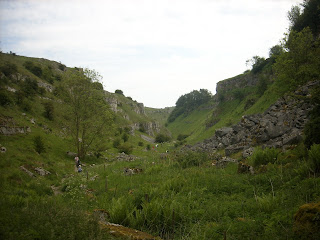 I made good progress along the dale and stopped to take a photograph of an interesting sign referring to an ancient and obscure bye-law. 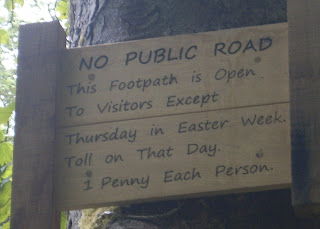 Finally, I walked to Bakewell along a different route.
Posted by Lee Firth at 6:43 PM 5 comments: