I got off the bus at the Ladybower Inn, and unusually, was soon talking to someone who would end up being my walking companion for the next hour or so as we climbed to the summit of Win Hill. His name was Tony.

We walked south along the road and then turned right to cross the dam wall, then took a path through the woods which soon intersected with the route up Parkin Clough. I reckon that this is the steepest route up Win Hill: I needed to stop for about half a dozen rests. If he were on his own I doubt that Tony would have stopped at all, despite his being at least ten years older than me. I was still pleased with my level of fitness though, it seems to be improving all the time, and having someone else with me spurred me on.

After taking photos and chatting for a while on the summit we went our separate ways; Tony in the direction of the Kinder Plateau, and myself down to Hope. I found a route, part of which I hadn't walked along before, which took me down to the main Hope Valley road, just to the east of Hope.

A few hundred yards and I was at the Old Hall Tea Rooms; arriving just in time so that I could still order something from the breakfast menu...a full English breakfast and a pot of tea.

I took my time eating my meal; the weather was a bit miserable and I was only planning walking the two miles or so into Castleton, and so wanted to make the day last.

Eventually I did leave and started heading westwards, but after about five minutes I realised I had forgotten my map; I'd left it hanging on the back of the chair when I left. So, I quickly returned to the tearooms where the waitress was expecting me - and then made my way back towards Castleton.

I soon walked past the field where people were making preparations for tomorrow's Hope Show (August 27th.) - I noticed how all the tents and marquees seemed to be white and lacked any garish sponsorship logos on them: Maybe it's a stipulation with the event being held in a National Park.

By now it was raining, but not very heavily. The next thing I noticed was that a concessionary path that I wasn't even aware of, had been closed; the sign explains the reasons. 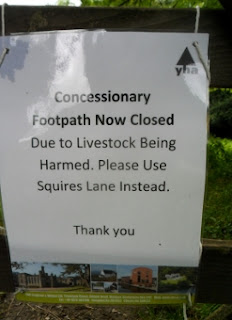 I also noticed some interesting, and rather attractive I thought, pieces of sculpture which seem to have been abandoned in the field which the footpath would have crossed. I wonder if the two facts are connected? 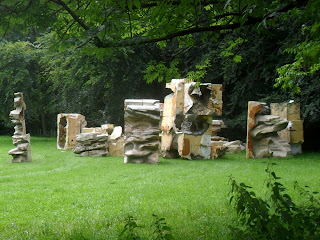 The intensity of the rain was increasing and so for the last half a mile or so into Castleton I walked pretty quickly; arriving with only a few minutes to wait for the bus.
Posted by Lee Firth at 4:48 PM 3 comments:

A Lovely Day For A Walk.

It was the hottest day of the year for some parts of the country; but not here in Yorkshire. It was still a lovely day though; after a few drops of rain early in the morning it brightened up later, and although the sun rarely shone, it was still pleasant and warm...maybe a bit muggy though.

I didn't take the opportunity to visit the Peak District though. I went walking with my friend Chris from Leeds. I met him at Wakefield Westgate Railway Station and we walked along stretches of the River Calder, the Aire and Calder Navigation and the River Aire, to Fairburn Ings Nature Reserve...and then looped back to Castleford.

The route and the countryside was completely different to anywhere in the Peak District, but it was still enjoyable, especially because Chris has personal knowledge of the area.

I got off the bus at Baslow Nether End and my first port of call was the toilets, and then the shop - for a carton of milk and a flapjack to set me up for the walk ahead.

I walked up Bar Road and for the first time I didn't need to stop to catch my breath; my fitness level seems to be really improving now after two years of almost weekly walks in the Peak District. I quickly caught up with, and then overtook, a young couple: I was quite proud of myself. I did briefly stop once though, further up the hill, to photograph the name of a house which was informing me of that which was obvious to me.

I didn't continue right to the top of the moors, but turned north along a path halfway up the climb. I've not gone this way before; I've previously walked along the top of the Edge and down in the bottom of the valley; but from this midway point the terrain and views are just as interesting - it was quite hazy though; it did brighten up later, before clouding over again and then starting raining.

The path continued for over a mile and then I reached Curbar Gap, a popular beauty spot. I walked down the road for a couple of minutes and then picked up what was most likely a continuation of the same path: I could see right down into the valley of the River Derwent to my left, and the high ground beyond, and to my right there was Curbar Edge with many climbers and hikers silhouetted on the close-by horizon as I was struggling to look towards the direction of the sun, which was breaking through the clouds by now.

This section of path was quite well used for the first few hundred yards; there were plenty of large rocks which could be used for bouldering, but it soon became more and more difficult to follow.  I eventually ended up trying to walk through dense bracken which was taller than me, and it was quite dangerous underfoot with there being a lot of boulders, loose rock, and fallen and damaged trees everywhere...and a steep descent. I soon gave up, re-traced my steps for a few hundred yards and found a way down where it wasn't quite so overgrown.

It didn't take long to find a path, looking at the map it seems to be a different one however, and after a pleasant walk through the woodland I arrived at the Chequers Inn, situated on the highest part of Froggatt village. It looked tempting; but I feared it was far too posh for me; being sweaty, covered in mud and having bits of bracken and silver birch still clinging to my clothes.

So...I walked past the pub and continued up the road for maybe a quarter of a mile and then took the footpath which descends through woodland to Grindleford. Along this stretch I managed to take a photograph of a foxglove plant, hanging at a precarious angle and catching the sunlight. 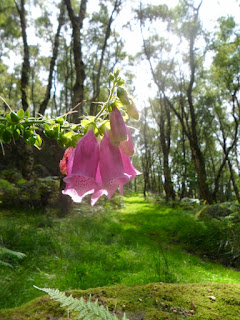 I soon reached Grindleford, crossed the road and continued walking alongside the river, upstream in the direction of Leadmill, and then Hathersage. I reached Hathersage with enough time to spare to visit the toilets and pop into the shop for another flapjack: I faced a choice, Devonshire Flapjacks or Dorset Flapjacks. They were both the same price and so I decided to purchase whichever variety was larger. Now; I know that the county of  Devon is larger than Dorset so I picked that flapjack up first...75 grams. Dorset seemed heavier in my hand; and it was - 125 grams...so Dorset was my choice.

I go walking in the Peak District most weeks, usually on a Sunday. Although the weather has been fine here in Doncaster so far today the weather forecast is predicting heavy, thundery showers from lunchtime onwards. I've been listening to the cricket commentary live from Headingley, Leeds and they've already had a thunderstorm there.

I've found a site where I can view a selection of live webcams from various locations in and around the Peak District and can keep an eye on the weather conditions.

I don't mind walking in the rain; it spoils the views and limits what I'm able to photograph though, however being caught out on the moors in a thunderstorm can be potentially dangerous...so I'm having a day spent at home listening to the cricket and watching the Olympics.
Posted by Lee Firth at 1:22 PM No comments: