Here is the new timetable for route 65; no real changes, just a slight tinkering with the times.

The timetable is valid from January 25th 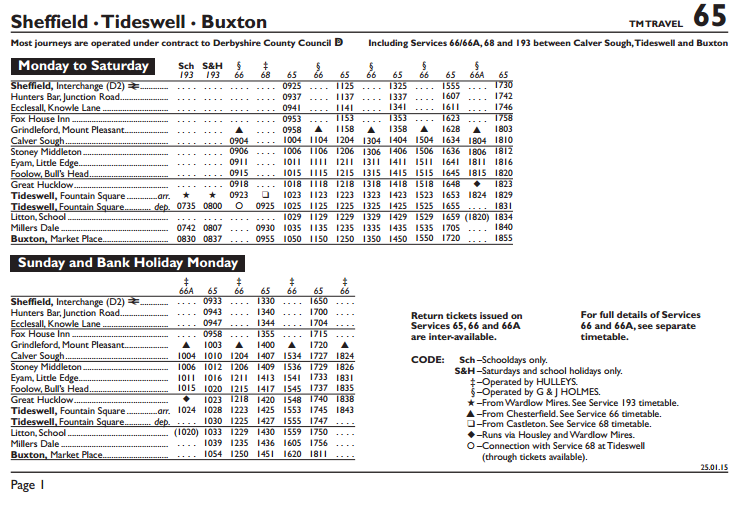 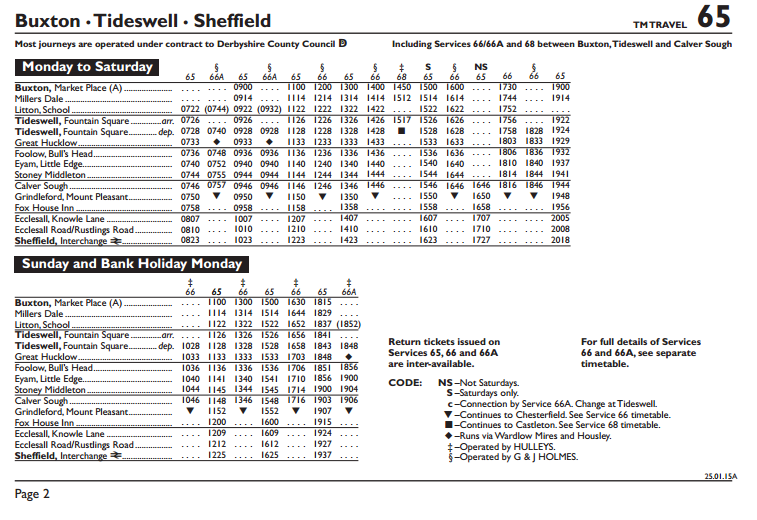 More changes here. There's now an improved  half-hourly service to Bakewell, with an hourly service maintained to Chatsworth. Unfortunately, the route beyond Bakewell only operates every alternate hour. 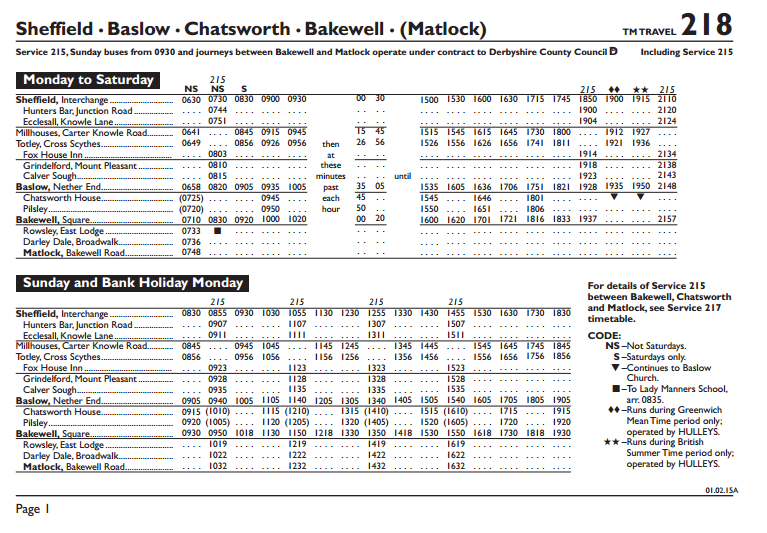 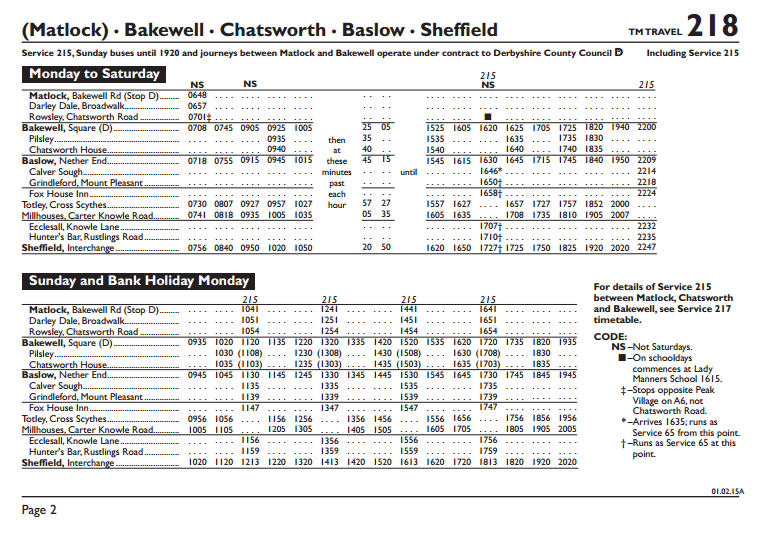 There was still a bit of lying snow on the ground in Doncaster this morning; there was much more in the Peak District though, about twelve inches I'd say, making walking a bit treacherous in a few places...and always hard work.

No problems at all with public transport today, although I did partially overhear a rather Kafkaesque conversation between an elderly passenger and the driver who were arguing/discussing as to whether the bus company was running a Saturday service today, or a modified weekday service, and therefore would his bus pass be valid for travel before 0930. I don't know what the details were, but the driver let him use his pass. I think the driver did mention that the service is exactly the same on Saturdays and weekdays [and modified weekdays] ...but that, of course wasn't the issue, he can use his pass before 0930 at weekends, but not during the week; so, can a Tuesday ever be a Saturday? is a Tuesday therefore always a modified weekday when it falls between Christmas and New Year? and is a modified Saturday only ever a Saturday? I'm glad that my travel pass is valid for use at all times whatever the day is...or isn't.

I got off the bus at Fox House, literally not knowing what day it was. I still remember where the stile was to gain access to Burbage Moor and walked along the path, which was easily defined in the snow. I had specifically chosen this location today so that I could see how the felling of the plantations was progressing. [Details of the programme are here]

A lot of progress has been made; I reckon more than half of the conifers have already been felled. Some of the cleared areas can just about be made out through the snow on the far left of the second photograph.

I took plenty of photographs, but only a few turned out to my satisfaction. There were some dramatic views of Kinder Scout and The Great Ridge in the distance with a threatening wall of cloud bubbling up, sunbeams piercing through to spotlight individual peaks at times. The conditions were perfect, but unfortunately the camera lens isn't as good as the lenses in my glasses...I could clearly see so much detail that the camera has completely missed.

I dawdled and meandered my way to the Information Centre. I used the toilets and then went in the tearooms. They were busy as I'd expected, since I'd seen a lot of people out walking on the main paths. It was still quite early so I found a suitable rock, sat on it and finished off my sandwiches.

I did an elongated loop walk, sticking to the areas where plenty of people had already been walking. I continued to pass a lot of people, including many dogwalkers; one woman passed me and was enthusiastically shouting at her small dog, on several occasions changing from 'Good Boy!' to 'Good Girl!' Maybe the former was meant for me; I didn't reply...I never beg.

It's been a lovely morning and so I had to get out of the house. Obviously there's no public transport running and so it would have to be a local walk. It's only a fifteen minute walk to Doncaster Lakeside from my house; it's a very pleasant spot and I really should pop down there more often.

I took the short-cut that I know through the estate and was wished a 'Merry Christmas' by a very attractive young woman standing leaning against a car. She was wearing a very short dressing-gown and exposing a lot of naked flesh. I was wearing my bright red padded ski jacket - maybe she was a little tipsy and thought I was Father Christmas and she wanted to come over and sit on my lap...it was certainly a pleasant start to my day!

I did a full circuit of the lake when I got there, and climbed two of the three artificial mounds too to enjoy the view - all the way to the Pennines. I've never walked all the way round the lake before, just sections of the route. Today I was able to linger at the various viewpoints and the statues to take photographs...and to cross over the bridges to walk on both of the islands. 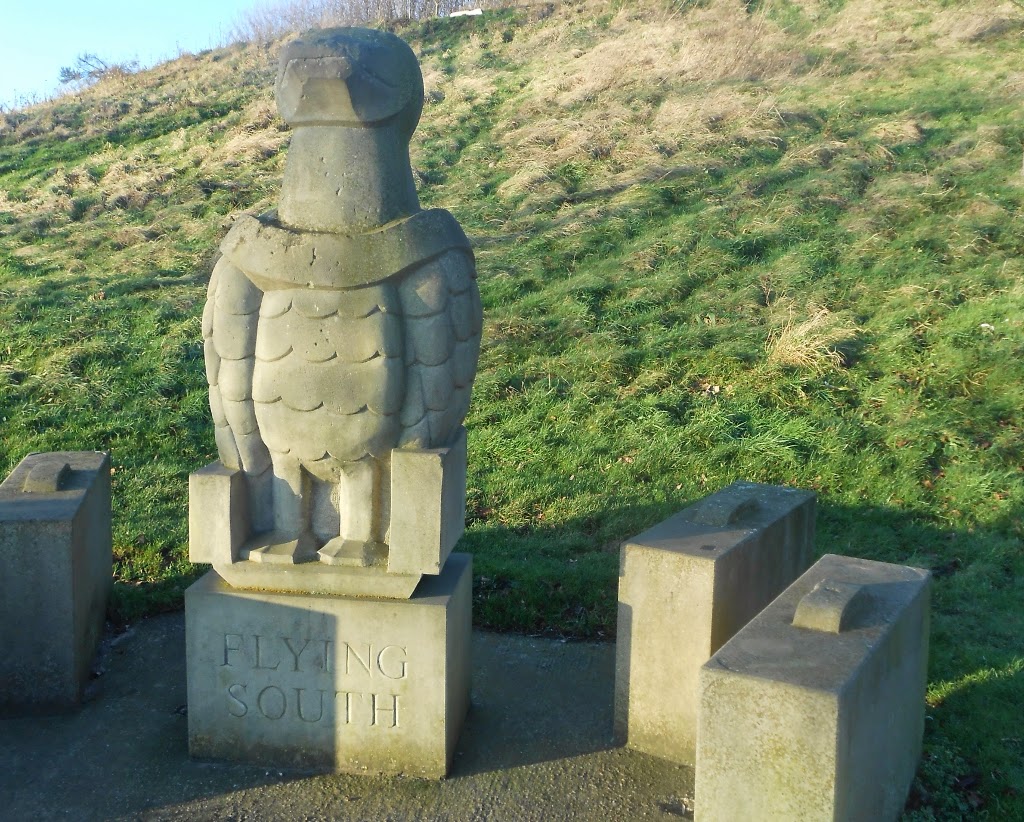 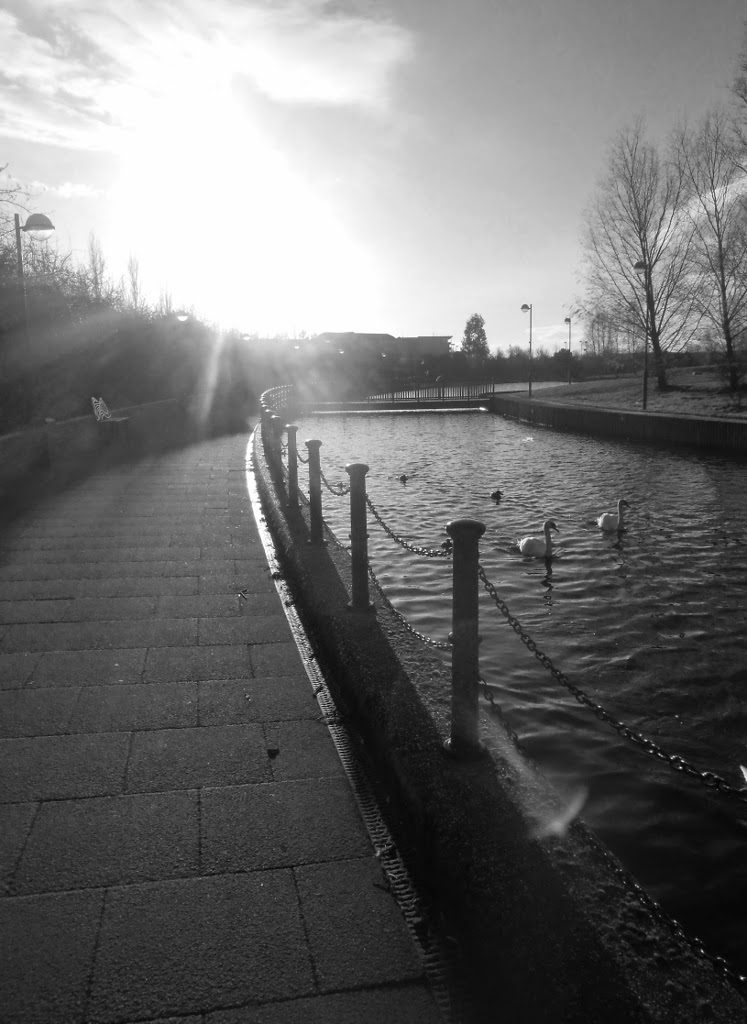 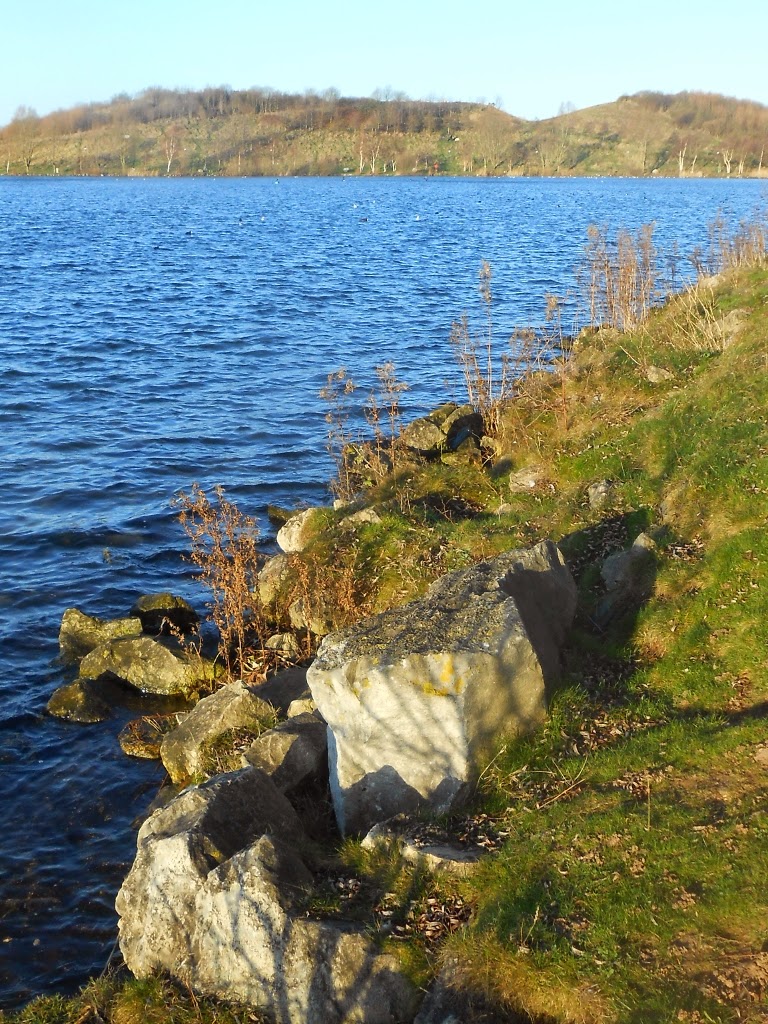 I've just been checking my diary and the online weather forecast until the end of the year and it looks like I won't be getting out walking in the Peak District until the New Year.

It's forecast to be lovely on both Christmas Eve and Christmas Day and so I might be tempted to do a local walk to the Lakeside area and the nearby fields out towards Bessacarr.

As usual I'll be spending the holidays alone, but I've got plenty of nice food in the freezer, two game pies, a five bird roast, a four meat prepared roast, a sweet-cured gammon joint...and all the trimmings as well; roast vegetables, mince pies...and quite a bit of chocolate.

I shall have to walk off the calories in the New Year.
Posted by Lee Firth at 4:43 PM No comments:

A Visit To Cannon Hall

It would have also been a visit to Newmillerdam as well; we spent too much time in the café at Cannon Hall though.

A day out today with Siobhan, my support worker; Christmas shopping at Cannon Hall Farm Shop. Here's a photograph of the goodies: two game pies (I would have preferred rabbit pies - but they didn't have any), fruit and nut flapjack, and some lemon curd Bakewell Tart. There was so much to choose from, but probably not as much choice as last year before the building renovations. There's more space to walk round now though. 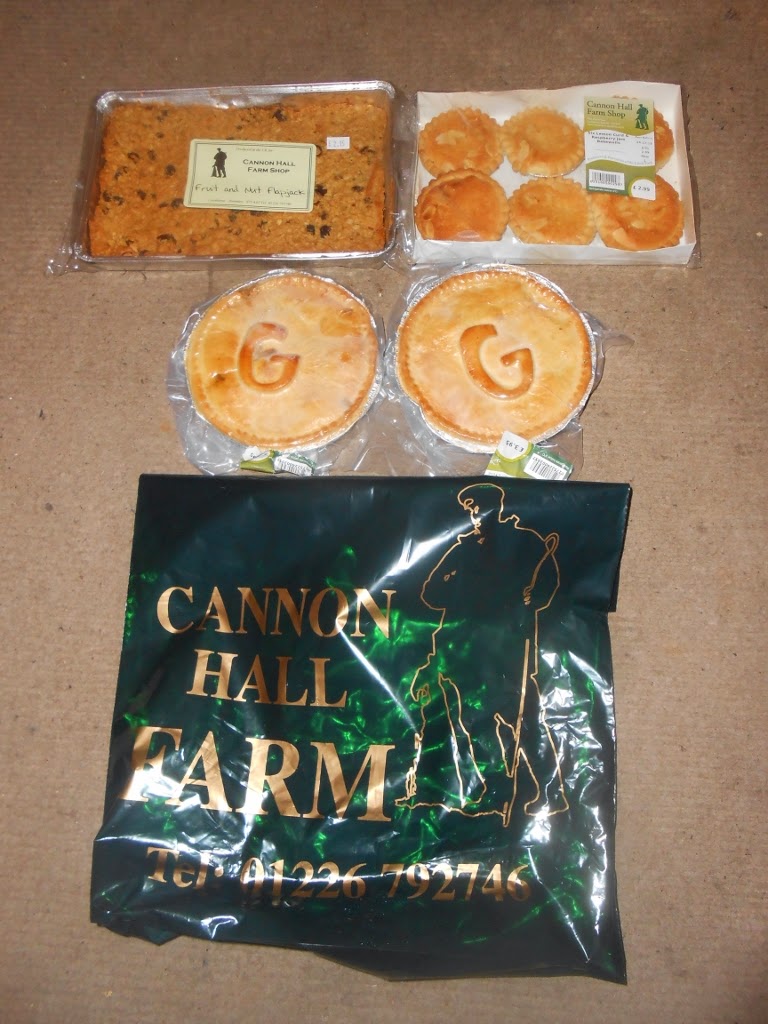 We arrived at about 11:15 and tried to pay the £3 parking fee at two different locations, but the machines must have been full. So; a good start to the day. The sun was at a good angle to take some photographs of the house and the grounds, so that was the first thing I did. 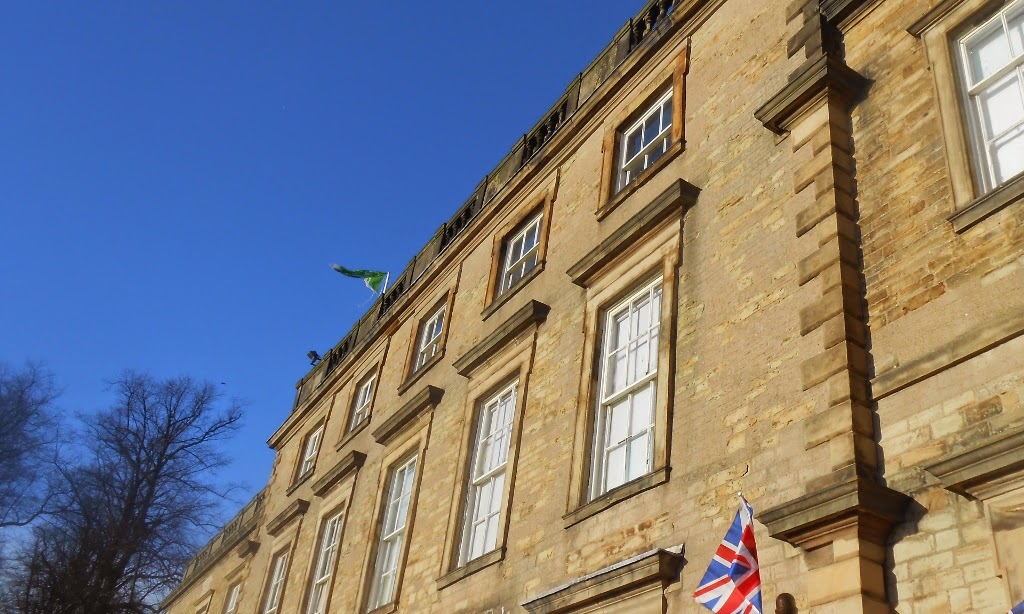 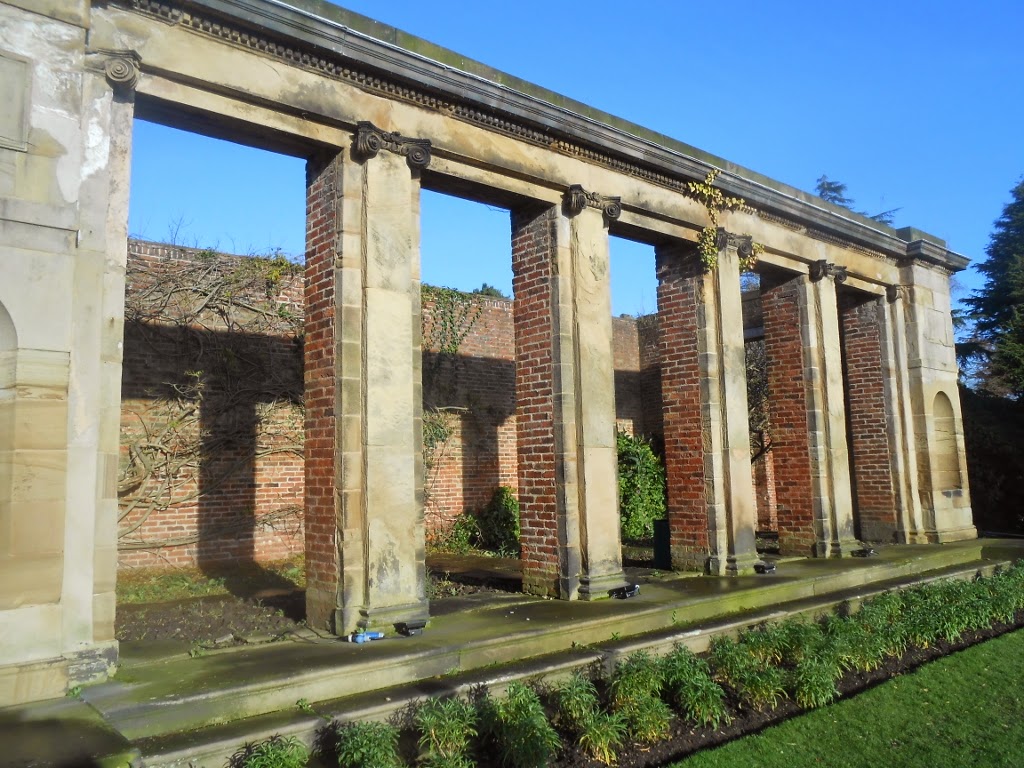 There were a couple of very garish portaloos hiding in a corner, hopefully not being too intrusive. 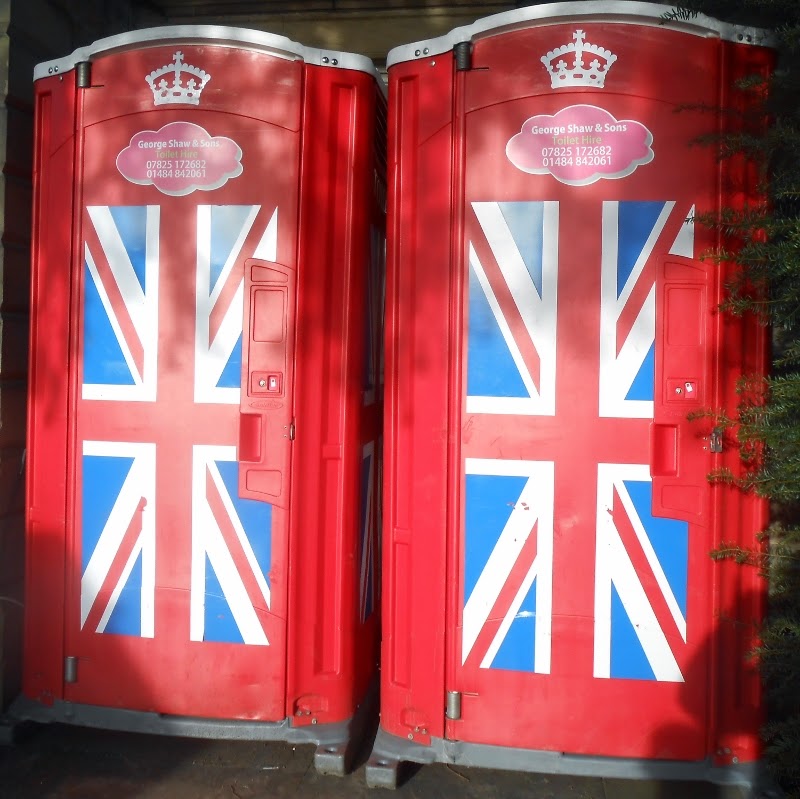 We then went to go and have a look round the hall; it's free admission by the way. To our surprise it wasn't open yet; it didn't open until twelve o'clock.. So...we would have to go in the café; for a pot of tea and a pulled pork and stuffing sandwich each. I think I had an Aspergic moment when I asked for a pot of tea for two and some extra water and the woman serving thought I wanted a glass of water...are my verbal communication skills really that bad?

I think we lost track of time in the  café, but we eventually walked across the courtyard to the hall. Cannon Hall has a very large and impressive collection of  Moorcroft Pottery . There was also some lovely Christmas decorations; possibly period, and certainly appropriate for the decor and furniture. There were very few people around and so I was able to take a few photographs, but none of them was any good.

Finally, we went to the farm shop, where I bought my pies and cakes.

By now there wasn't enough time to fit in a visit to Newmillerdam and a walk round the lake, so we called at a couple of out-of-town supermarkets on the way home to see what we could find.

We had an accident with a Pound coin and a trolley safe.

It was quite cold and frosty today; I didn't feel it at all though. I was well wrapped up: two tee-shirts, a lumberjack shirt, a thick woollen fleece, and a ski jacket that would keep me warm at a temperature of minus thirty degrees Centigrade - and I didn't need the 'fur' lined gloves or the trapper's hat.

As I was sitting on the bus at Sheffield Bus Station a woman got on and asked the driver which departures throughout the day from her destination would have a doubledecker, like this one. She mentioned being stranded once when there was no room on a small single-decker bus...and didn't want to be in that situation again. On several occasions I have written about problems with overcrowding on the 218 service, and so I wasn't surprised; both Chatsworth House and Bakewell are very popular destinations from Sheffield.

It was an excellent day for photography; these are the best photos I took. 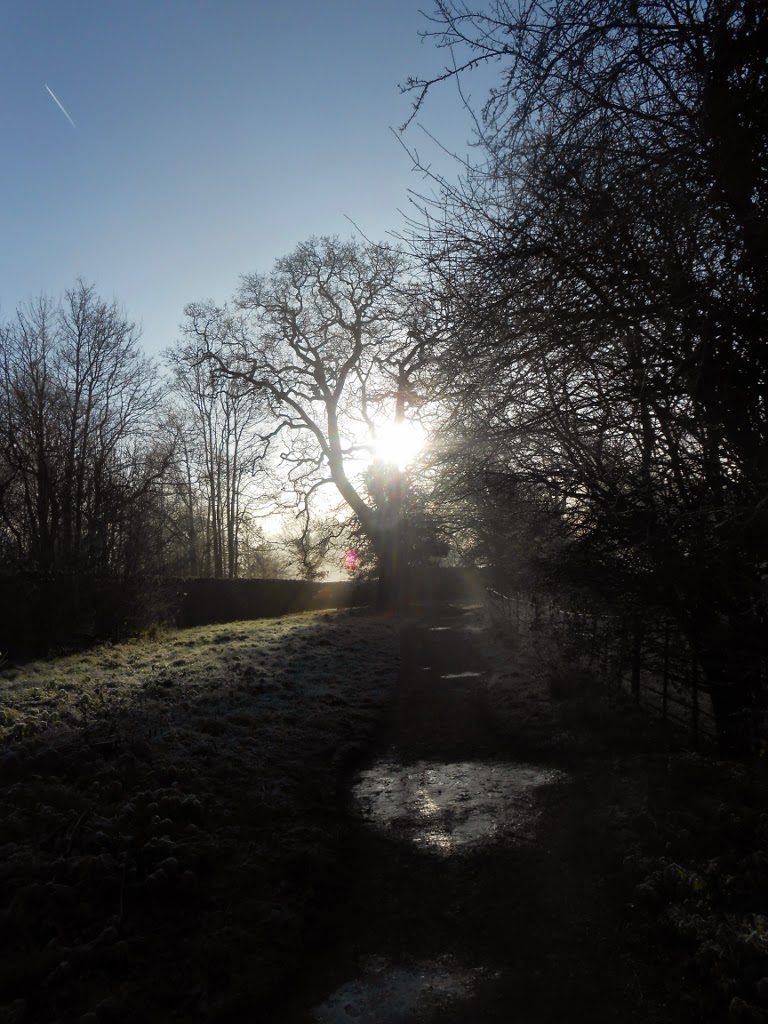 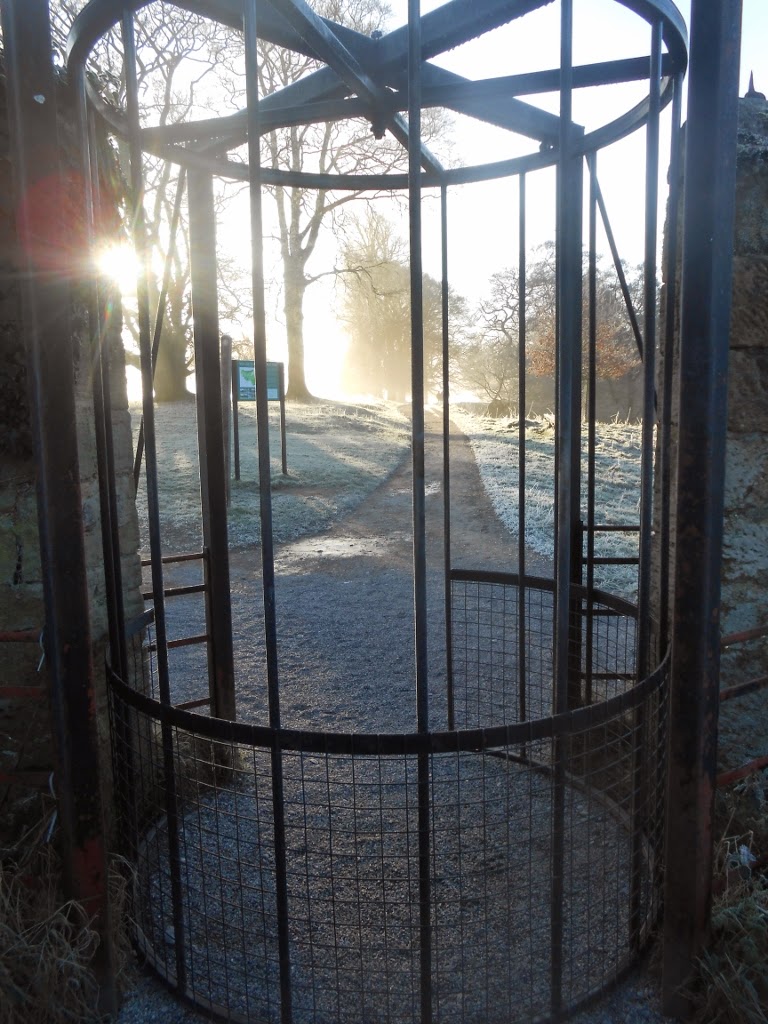 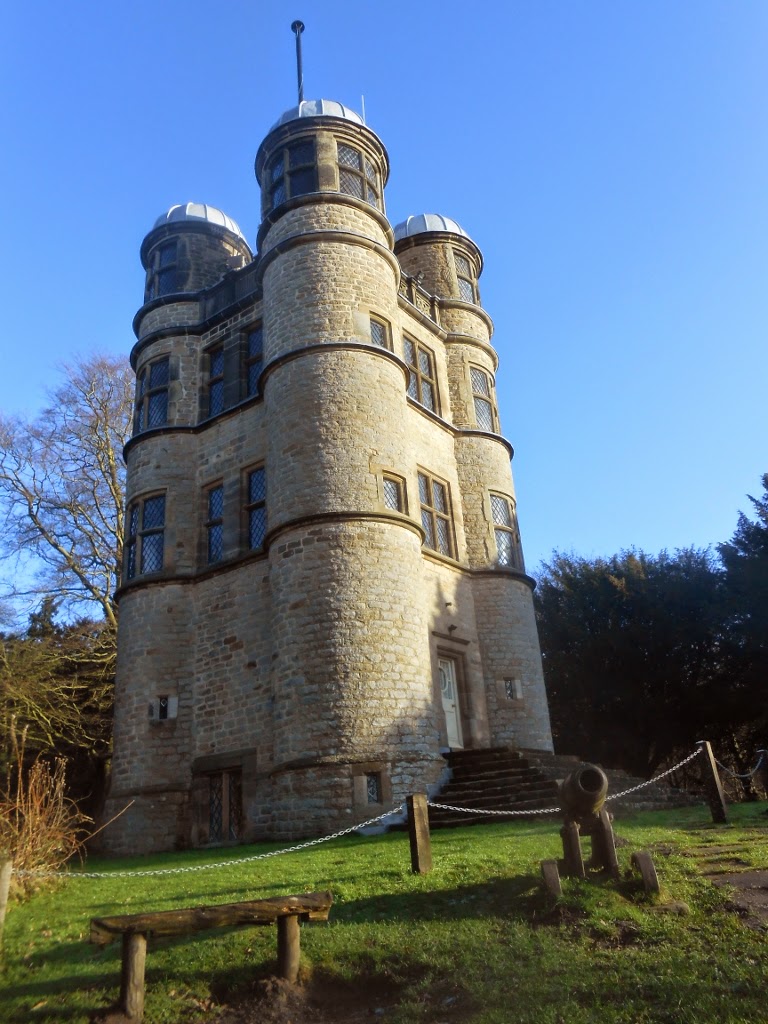 I got back to Baslow Nether End and went over to the bus stop to confirm that I'd got fifty minutes until the next bus; plenty of time for a pot of tea and a bun in the café. I had no time at all though; the 13:40 bus immediately turned off the main road to the area where the bus stops are - it was ten minutes late.

I had a decision to make; was it going to be the bus, or tea and a bun? I chose the bus.

I finished the walk early today; I had intended to walk over to the estate village of Edensor and photograph the church and some of the pretty cottages, but after struggling climbing down the steep and uneven steps from the Hunting Tower my left knee was hurting me...and it was feeling a bit weak. It was a type of throbbing pain right at the back of my knee; it's nothing new, I've had it before, and it's fine now - three hours later.
Posted by Lee Firth at 4:47 PM 2 comments:

I've just found out on the South Yorkshire Transport Forum that there will be significant changes to bus services into the Peak District that I use, coming up in January and February.

To summarise the situation; there will be a better service to Bakewell, but one of the Matlock routes is being curtailed, only going as far as Chatsworth House.

So, it looks like the area between Chatsworth House and Matlock will be out of bounds.
Posted by Lee Firth at 3:43 PM No comments:

Here are some photographs I took. 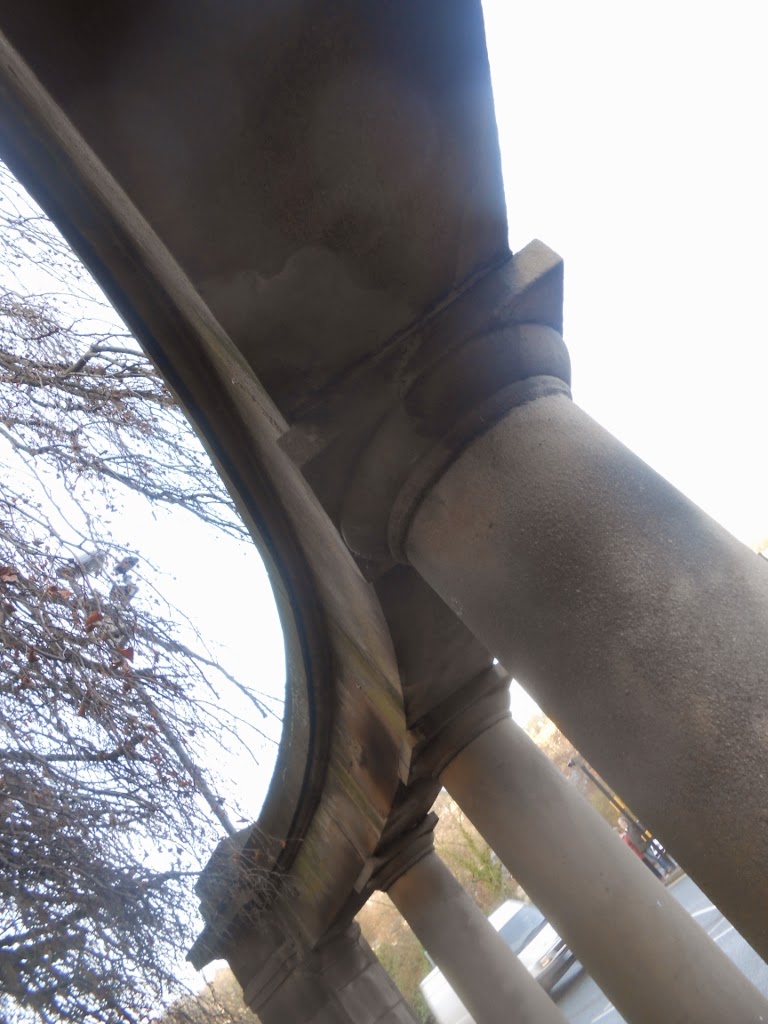 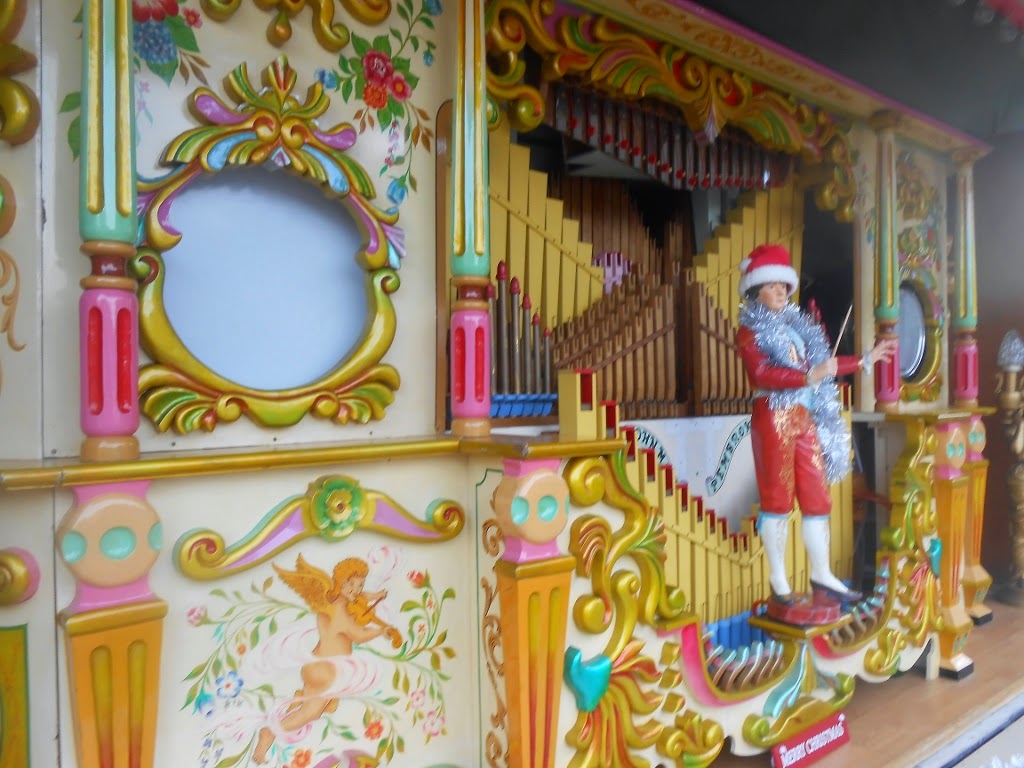 I didn't buy anything more exotic than a game pie from the Medieval Pye Stall.
Posted by Lee Firth at 6:04 PM 1 comment: