I'm not walking today because the weather is rather miserable. I quite often go to the Peak District on Sundays though because the bus service from Sheffield is actually much better than it is during the  rest of the week; there are extra routes to Hartington and the Upper Derwent Valley, specifically for walkers. However, the train service from Doncaster to Sheffield on Sundays is very limited - the first train [which I catch] departs at 08:03. However, because of engineering work, it's sometimes cancelled. The replacement bus service or the regular X78 service to Sheffield take too long and so if the train is cancelled I just go back home - I live quite near to the railway station. The second scheduled train departure isn't until 09:15 - the middle of the morning.
Posted by Lee Firth at 11:43 AM No comments:

I bought some new boots on Thursday; a real bargain at £12.99. They bedded in really well on today's walk - I could walk downhill without them rubbing my toes.

The walk started with quite a steep climb out of Bradwell, skirting the perimeter of Hope Cement Works, which is well screened and so doesn't spoil any of the views along this route. I then went along fairly level tracks and country roads to Mam Tor, the second time this year I've climbed the Mother Mountain; which is nearly 1700 ft high. I counted the steps this time - there are 243 of them, plus long stretches along a steep path to the summit, from where the views of Edale, The Hope Valley and along The Great Ridge are spectacular 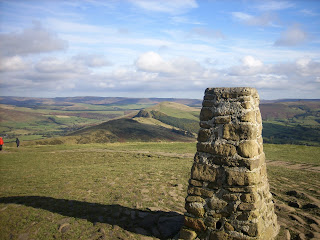 I then walked along the ridge, which I notice is now being marketed as 'The Castleton Skyline Walk' to Hollins Cross and then took a rather steep path back down to the village - this really put my boots to the test.

Highlights of the day: my new boots and the weather, which was perfect for photography.
Posted by Lee Firth at 4:41 PM 2 comments:

I've been using a new rucksack for my last two walks. It's much more comfortable than my old knapsack and sits much higher on my back, thus preventing the lower back twinges which I was noticing.
Next I need to buy some proper hiking boots; my current boots are merely safety boots...for use on a building site I suppose. They are fine when I'm walking on the level or uphill, but when I'm going downhill, the tops of my toes rub on the metal toecaps. Maybe I'll just have to devise walks that don't have any downhill sections...seriously though, I'm hoping that my Disability Living Allowance tribunal will be successful and I'll be able to afford some proper hiking boots.
Posted by Lee Firth at 6:40 AM No comments: 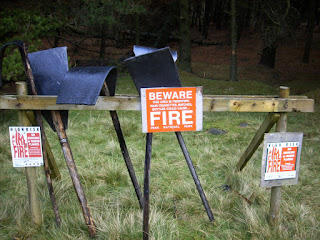 Probably my least enjoyable walk of the year so far, spoiled by the weather...not a good way to start my blog I suppose.

Before setting off this morning I checked the BBC weather forecast and although not as promising as it was predicting yesterday 'sunny intervals and the slight possibility of a light shower'; this was good enough for me. If only that was the case though...it rained more often than not and was dark and cloudy most of the time when it wasn't actually raining.
The day got off to a bad start with the train leaving Doncaster Station five minutes late and consequently arriving at Sheffield five minutes late. I rushed to the bus stop, just hoping that the Fox House bus would be late, and it was - by seven minutes.
I popped in to the toilets at Fox House and then set off towards the Burbage Valley, taking the path at the bottom of the Valley alongside the Burbage Brook.
I soon arrived at the old packhorse bridge and then popped into the dense larch plantation to shelter from the rain and eat my sandwiches - I absolutely love the smell of larch...and pine trees generally.
As you can see in the photo, even though it was raining, there's always the risk of fire; maybe it's the resin.
Finally, I looped around the Fiddler's Elbow and took various country lanes and tracks back to Hathersage.
HIGHLIGHT OF THE DAY - returning to Hathersage through Moorseats Wood; the sun actually shone from a few minutes.
LOW POINT OF THE DAY - when a man got on the bus and then had to take off his gloves, unbutton his coat, then fumble in his pockets to find his wallet so that he could show his bus pass to the driver.
Posted by Lee Firth at 4:32 PM No comments:

Last year I was diagnosed with Asperger's syndrome and given a travel pass by Social Services. On pretty much a weekly basis I've been using this pass to go hiking in the Peak District - I live in Doncaster and so it's relatively easy for me to get there. During this time I've been taking photos and posting them on Facebook; but now I've decided to set up this blog and share my photos and experiences of my visits to this beautiful part of the country with a wider audience.
Posted by Lee Firth at 6:46 AM No comments: