Bakewell, Over Haddon, Alport, Stanton in Peak, Pilhough, and Rowsley

I read the weather forecast last night and the rain was due to stop by ten o'clock: not too bad, it stopped at mid-day. Overall it wasn't a bad day for walking; the worst problem was the conditions - very muddy, and flooded in places. This meant that most of the walk was done on roads, not my preferred option, but probably for the best...I slipped and fell twice. I didn't hurt myself, but my clothes were in a right mess.

Today's walk started at Bakewell, and started with a difficult navigation task - finding my way out of the town using paths that I'd walked along several times before...but in the opposite direction, towards town. It's much harder going the other way, there are no familiar landmarks to aim for - and the Ordnance Survey map isn't much use when this amount of detail is required for locating individual streets, alleyways, and snickets.

In the end I found myself having left Bakewell by the Haddon road, and so just continued walking. Just before leaving the town I came across an interesting combination of signs which amused me. 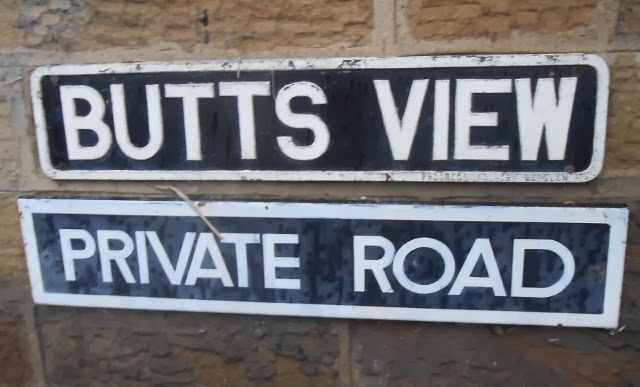 It took a while to reach Over Haddon, where I had a toilet stop, then I continued down the hill into Lathkill Dale. Halfway down I noticed a footpath I hadn't walked along before; it didn't lead to anywhere in particular; it was just another way to get down the hill. I wish I hadn't bothered; this was where I slipped over twice and then continued going down the hill for several yards on my backside.

This is how my rucksack looked when I reached the river at the bottom of the dale: my trousers were much worse. 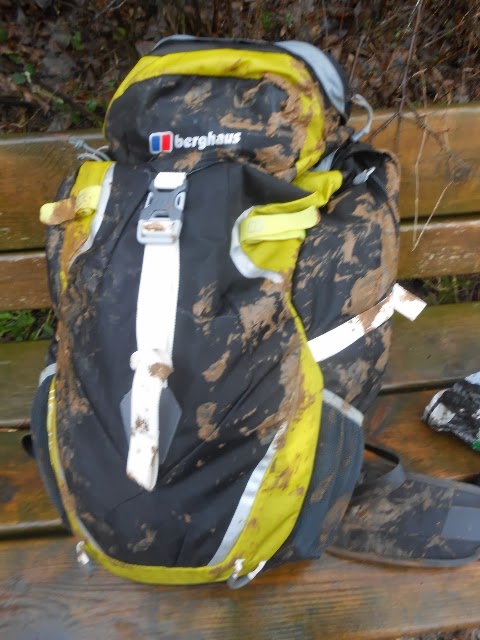 The River Lathkill is usually no larger than a stream; today it was a raging torrent that I could her from many yards away. This photograph shows one of the fishing weirs.

I continued walking alongside the lower stretches of the river down to Alport. One section of the path was flooded to a depth of ten inches; my boots coped well with this depth. It was firm underfoot, gravel I think, and there wasn't a current. It was perfectly safe. 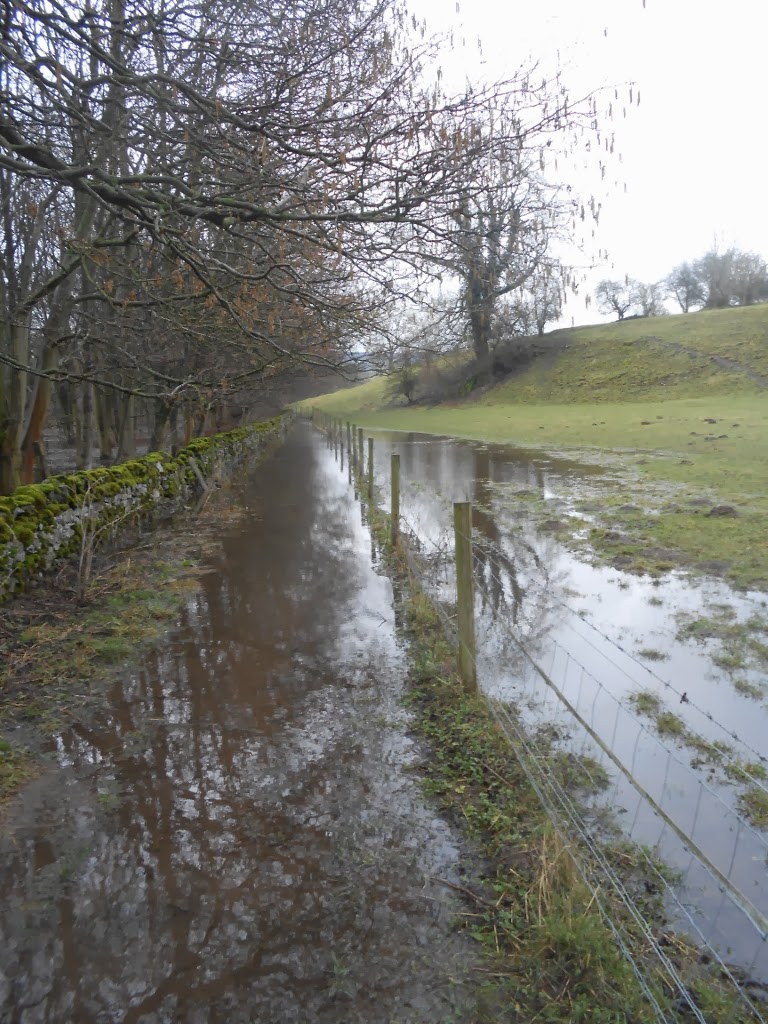 At Alport I walked through a part of the village I'd not seen before; there were some good high level vistas I could have photographed if the weather had been better...and a couple of builders' vans hadn't been parked in the way.

Apart from a short section of footpath I stayed on the roads all the way back to Rowsley, passing through Stanton in Peak and Pilhough, and staying for a few minutes at the viewing platform just beyond Pilhough; it's ideally placed for lovely views up the Derwent Valley. It was quite misty, but I could still easily make out Chatsworth House and the Eastern Edges further north.

I reached Peak Shopping Village at Rowsley and spent about twenty minutes in the toilets cleaning myself up; I feared that I'd not be allowed on the bus, or inside the tea rooms.

Satisfied that I was now presentable, I had a cream tea.

The bus was five minutes late; I didn't have a particular problem with that - it happens. I did have a problem with the driver's attitude though. As the bus approached my stop on Paternoster Row [the stop nearest to the railway station] I pressed the buzzer, got up and walked to the front of the bus. The driver didn't stop, so I asked him why. He said that I hadn't pressed the bell. I told him that I had and he must not have had heard it because the engine was noisy. I then asked him why did he think I was standing there right next to him. His reply was, "I don't know, I'm not a mindreader."

I didn't need to be one.

The bus station is only a few hundred yards further on, so his behaviour wasn't any real inconvenience for me today...but it might have been if a train was due.
Posted by Lee Firth at 6:45 PM No comments:

I had planned to go to Foolow today to have a look at the recently formed sinkhole. I got on the number 65 bus at Sheffield Bus Station; the weather was lovely, brilliant sunshine up to Fox House, but over to the west, in the direction of Foolow, I had noticed a threatening bank of dark clouds. The bus stopped at Fox House to let several people off...and I got off too.

The weather remained good for the next hour and a half and I managed to get some good photos, especially from the old quarries. 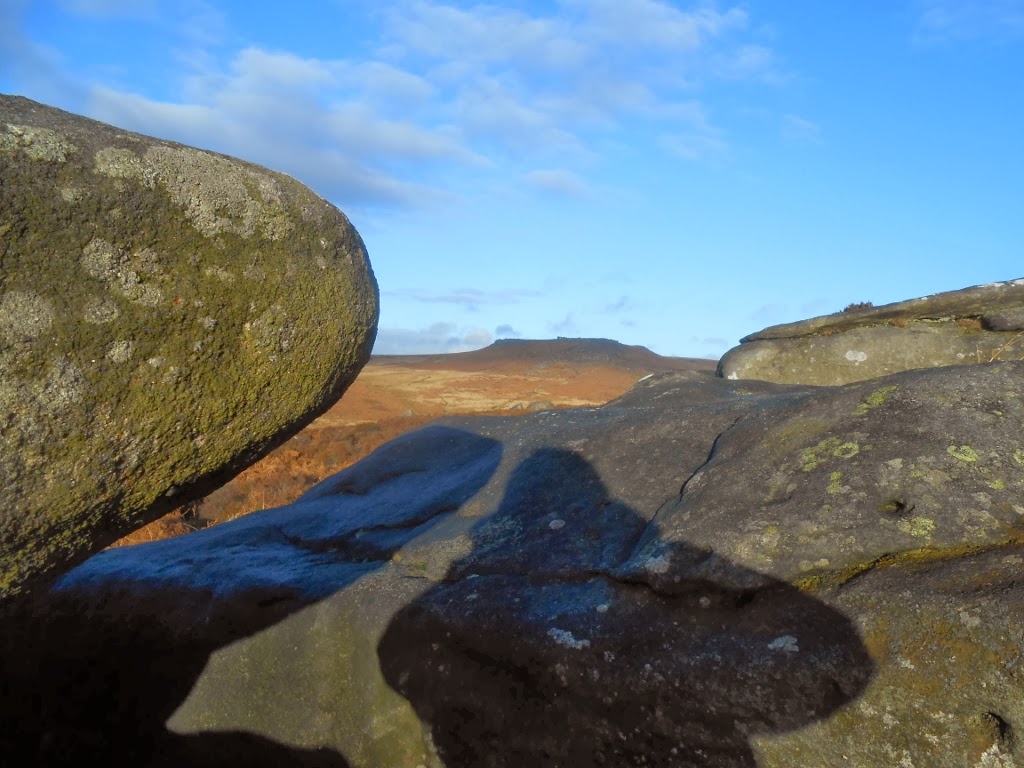 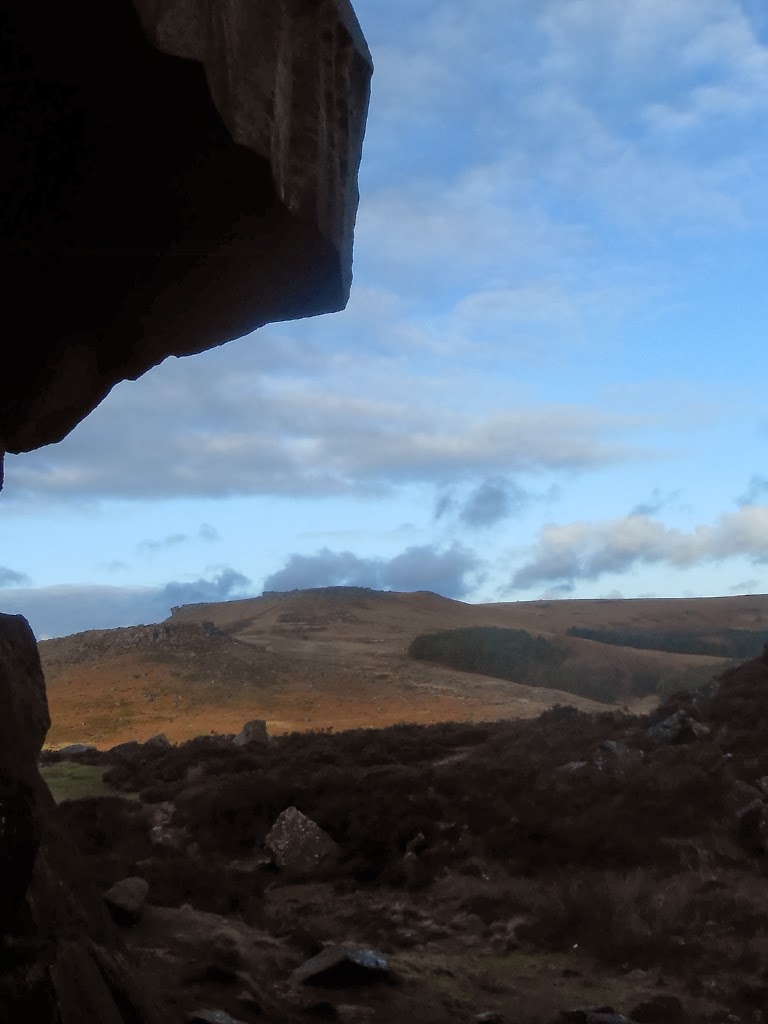 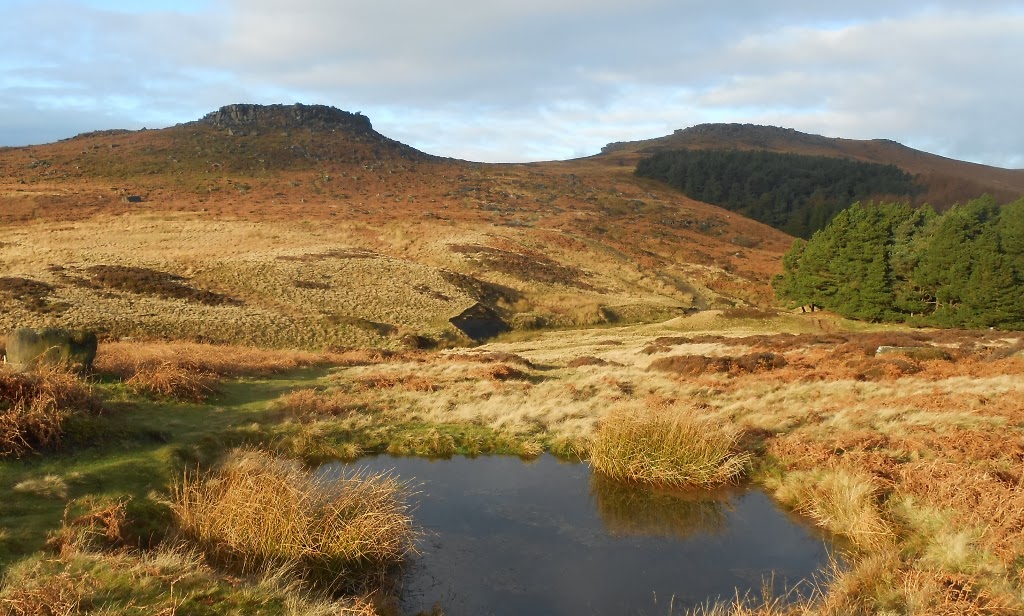 I walked along the bottom of the valley and returned back towards Fox House using the high route, taking in Higger Tor and Carl Wark.

When I got down to the road at the county boundary the timing was perfect for a visit to Longshaw Lodge for tea and cake. The tea was free; I only needed to present my bus ticket. TM Motors are good with their special offers for their passengers - it's just a pity that many of their buses are old and poorly maintained, and their routes and timetables seem to be inconvenient for many people. (Many students studying at the two Sheffield universities took advantage of the £2 discount at Chatsworth House last year.)

I had to pay for the chocolate cake: it was too dry for my liking though.
Posted by Lee Firth at 5:19 PM No comments: