A Visit To Brodsworth Hall

My English Heritage membership arrived in the post yesterday and so I thought I'd visit the nearest property today; Brodsworth Hall and Gardens, located only about four miles from Doncaster.

The village has a very limited bus service, so I caught the bus to Marr, a neighbouring village on the main Barnsley road; and then walked down a country lane to Brodsworth - about a mile and a half.

I arrived at the hall just after the gardens opened at ten o'clock and requested a ticket for a tour of the house - this would be at eleven o'clock. The conditions were excellent for photography and so I spent the next forty minutes keeping busy with my camera; never straying from the formal gardens and the croquet lawn near to the house though. 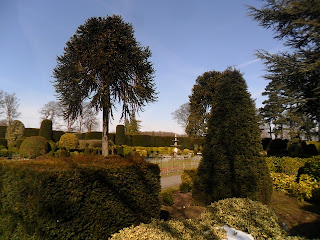 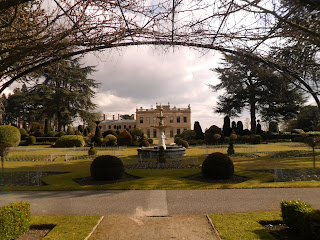 Obviously the gardens aren't at their best at this time of year, but a lot of work had still been undertaken in the beds, borders, and containers; and the maintenance of the topiary.

It was soon time for me to join the queue for the tour of the house, actually advertised as a 'taster tour', just taking in a few ground floor rooms - I'd be able to see the rest of the house later on when the 'freeflow entry' session commenced.

To be honest I wasn't too impressed with the interior of the house; it was that dark that I could hardly see anything. The guide did tell us a couple of funny anecdotes though about the family's dogs regularly shitting on the dining room carpet, the one we were standing on, and a bug infestation underneath the carpets in another room which meant that it would be rather unpleasant walking about barefoot, or in your socks.

The tour only lasted for twenty minutes and when I returned outside the weather was still pleasant and so I explored the rest of the gardens; the fern grotto, the rose garden, the archery range, the pet cemetery...and a lot of statuary.

After yesterday's trek across the Derbyshire snowfields it was a nice change to see some exotic plants associated with much warmer weather. 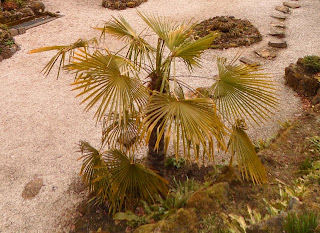 After about half an hour the weather turned cloudy and the temperature fell by a few degrees, so I popped into the tearooms for a cream tea, far better value than the soup of the day.

I did a final tour of the gardens, which are quite extensive and feature a lot of steps to climb up and down, and my thigh muscles, not fully recovered from yesterday's exertions, were aching a bit.

At one o'clock I went back inside and spent about thirty minutes wandering around the house; I was mostly interested in the servants' quarters.

Finally, I walked towards the village, but turned down the lane to Pickburn and took the most direct route to the shops at Woodlands and caught the bus back into town. If I wasn't so tired I would have extended my day out by climbing to the top of the landscaped spoilheap of the former Broadsworth Colliery, which is now a very impressive country park.
Posted by Lee Firth at 4:29 PM