The guard on the train this morning always calls Meadowhall MeadowHELL. He's obviously not a fan of this particular large out-of-town shopping centre. Personally I reckon that Meadowhall is no worse than any other, and is probably better than most: it certainly has good public transport connections.

I got off the bus at Brough and walked down the lane which leads to Hope Station, crossed over the quite ornate footbridge and continued slightly uphill across fields to reach the western edge of Aston. I then continued climbing, firstly walking along a lane and then track which petered out into a footpath as I reached open moorland.

As I got higher the views were getting better; the first photograph shows the Great Ridge, and the second one Edale valley and Kinder Scout in the distance.

I soon reached Hope Cross, an ancient milepost and boundary marker high on what is, I think, a stretch of Roman road. Here's a link with more details...and photographs.


The next section of the walk was down through the densely wooded plantation: it was very dark inside here. I reached the bottom and then walked along the southern shore of Ladybower Reservoir. The next section was along the Thornhill Trail, the trackbed of the old railway which was used to transport stone for the construction of the dam.

The final part of the walk was across fields towards Bamford Mill, where a crossing of the River Derwent is required, first across a narrow rickety footbridge, and then a series of wobbly stepping stones and sections of duckboard - the river seems to be very wide here, and full of rocks and debris. 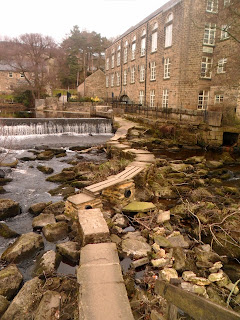 It was then only a short walk down the road to the bus-stop. When the bus arrived I did a bit of an experiment and discovered that my travel pass can be scanned upside down; meaning either face down, or with the text upside down. This knowledge has made my life marginally easier.
Posted by Lee Firth at 5:19 PM