On Monday I bought a couple of laminated maps which cover all of the Peak District. I needed some new maps, and they seemed to be a bargain.

They should last a lot longer than my old maps, but I did have some problems with them. They are even more difficult to fold than the ordinary paper maps, and won't fit in my map case.

It was annoying having to stop, take off, and unzip my rucksack just to look at the map. After a few stops I'd had enough and decided to stuff the map down the front of my trousers. It was held securely in place, but was restricting my movements a bit when going uphill. I think the best option might be for me to get a cagoule with a large enough pouch at the front.

I got off the bus at Stoney Middleton and took a steep footpath up through the village which was followed by a flatter section of farm track across fields and down into Coombs Dale where I spotted a temporal spacial portal leading to an infinite number of parallel universes. 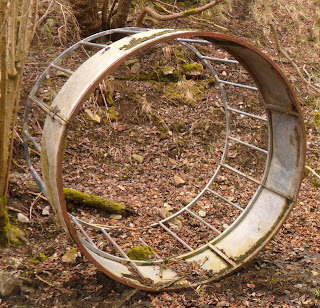 Deciding to stay in this universe I climbed out of Coombs Dale along a side valley which isn't named on the map, and then took the track which leads down to Rowland. I didn't go to Rowland though; instead I branched off along Hardrake Lane, a well-defined footpath half way up Longstone Edge with good views in most directions. By now the sun was breaking through the clouds and so I was able to get a few decent photographs.

The first was taken along Hardrake Lane looking back at where I'd just come from, and the second, looking back again, this time at Longstone Edge just as I was about to enter a small dry dale to the north of Great Longstone. Since reaching the area where these two photographs had been taken my camera had been warning me about the battery needing recharging: I managed to take a few shots of the church as I entered the village...but that was it.

I crossed the main street in Great Longstone and took a footpath leading towards the Monsal Trail: there are several. This one, in places was a ginnel, and in other places was a snicket. Both of these words are used in Yorkshire dialect and so I don't know how far south their usage in Derbyshire might reach.

I soon reached the Monsal Trail, and then Hassop Station, where I stopped for refreshments; a pot of tea and a scone.

There was no rush to catch the bus and so I sat on a bench just beyond the old station. After a few minutes two women walked by, chatting loudly. Suddenly one of them stopped mid-sentence and pointed at me and told her friend that she had planted the tree behind me many years ago, and then, in just as strident a manner informed her companion that they've now put a bench in front of it...the bench I was sitting on.

I didn't hear either of them make reference to me though, but I didn't know what to say, or do; so I said nothing and did nothing - I just continued sitting where I was until it was time to walk to the bus-stop at Pineapple House Farm.

As I was waiting for the bus I noticed a small mammal run across the road, something long and slender: a stoat, weasel, polecat, or ferret. Take your pick; I don't know the difference.