I travelled to Millhouse Green again today, as far as I can get on the bus going to the west of Barnsley. I immediately headed to the northwest to get views of Royd Moor Windfarm, walking along Spicer House Lane. 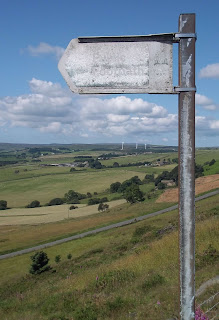 There are a lot of wind turbines in this area, not just the ones at the windfarm. It's quite high up and very exposed, it's also just outside the boundaries of the Peak District. I don't think you're allowed to site any turbines within the national park.

There's a viewing platform with a seating area and a very detailed toposcope on the top of Royd Moor. According to the inscription it's possible to see as far as York.

I took the road that leads towards Ingbirchworth and then a path going across fields to the southern edge of the village; I didn't walk into the centre of the village though...I'd already done some research and there's nothing interesting there, just some modern housing. 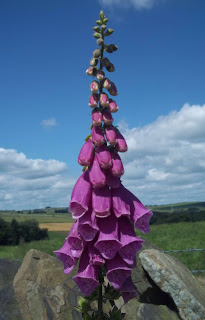 Upper Denby is about a mile to the northwest - it's church is Victorian. 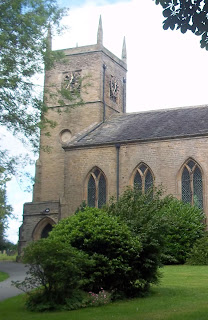 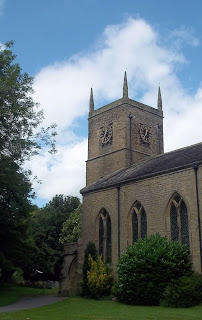 I then joined the Barnsley Boundary Walk, passing Gunthwaite Hall and stayed on this trail for nearly three miles before I continued going east as it swings to the northeast towards Cannon Hall, intending to finish the walk at Silkstone, three miles further to the east.

I was rushing to get to the bus stop, expecting a bus would be due in five minutes...but when I checked the timetable there wasn't one for over an hour. There's a gap of over ninety minutes without a bus going to Barnsley, probably because of the schools services I should think. I decided to carry on walking along the road for the mile and a half to Dodworth; I didn't save any time though because I still had to wait thirty minutes there and ended up catching the same bus I would have got on in Silkstone.