I got off the bus just south of the parade of shops at Darley Dale, walked a few yards down the road and then took the footpath across fields which leads towards Darley Bridge, using a short stretch of road which has a bridge which crosses over the Peak Rail railway line.

I walked through the village today, right to the church at the top of the hill. From here I followed the road which cuts back towards the hamlet of Crossgreen; which is printed as one word on the Ordnance Survey map, but I'm sure was two separate words when I saw the sign at the entrance to the settlement.

The next section of the walk was probably the highlight of the day, with some lovely countryside and pretty much perfect weather conditions for both walking and photography.

The route first cuts across fields and then climbs a shallow valley which runs to the south of Wensley; then steadily climbs up over undulating fields and grassland. I took several opportunities to stop and admire the views northwards behind me of the Derwent Valley, Chatsworth House and the distant moors. On the map this mile and a half of walking looks as though it might be quite boring; but, believe me, it isn't.

It was then a steady downhill walk to Bonsall, the last few hundred yards being along a country road, where at a junction someone had been having a bit of fun with the road signs...but certainly not helping anyone who might be lost. I've never been to Luton myself.

Bonsall is a pretty linear village with some impressive stone buildings and a historic cross in its former Market Place: I didn't take any photographs though because there were a couple of delivery vans spoiling the views.

For the next section I climbed a small hill, skirted a quarry and dropped down into Matlock Bath; Derbyshire's own 'seaside resort' - even though its probably sixty miles from the coast. 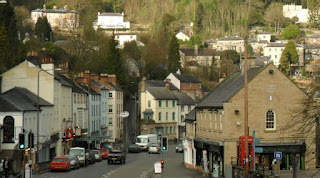 It's quite commercialised, with several fish and chip shops, cafés, pubs, amusement arcades and gift shops. In high season, or on a weekend in the winter it can get very busy, especially on Sundays and Bank Holidays when dozens of bikers will turn up with their motorcycles and park them along the Promenade for everyone to admire. It was nearly deserted today, with most establishments closed; maybe they were much busier yesterday.
Posted by Lee Firth at 6:41 PM