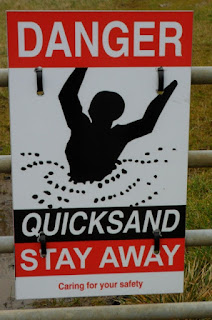 Today's walk didn't follow the original route I had planned because a couple of footpaths had been closed. The reason they were closed is clear in the photograph; they cross an area of land near to some old flooded quarry workings, and must be deemed to be unsafe at the moment.

I started the walk at Foolow and walked down the road towards the hamlet of Housley; somewhere I haven't visited before - it's only half a dozen farm buildings and houses though. I crossed the main road and took the footpath to the left. This goes in a straight line for over half a mile, something very unusual in the Peak District; and was as wide and well maintained as a bridleway.

I then arrived just to the west of Cavendish Mill; despite its rather grand aristocratic-sounding name, it's a bit of an eyesore actually. I had then intended to turn right and find the first footpath leading over towards Longstone Edge, but I ended up taking the photo where the footpath sign should have been; the next path, a bit further down the road, was no longer there either.

I continued down the road for about another ten minutes until I located a footpath leading across fields going in approximately the direction I required. This took me to a track, and then a path, which skirted to the south of the area which had been closed off; some rather out-of-this-world slurry ponds which seemed to give off a kind of diffused, translucent glow.

At the end of a piece of woodland I climbed up some fields to pass by a farm and then continued along a road until I reached a popular viewpoint on Longstone Edge. From here I took the restricted byway up the hill towards High Rake. I'm not sure if these are still active workings along here or not, but the deep gash in the ground caused by the quarrying is very impressive in its own way; like a miniature Grand Canyon. I took some photographs, but I couldn't get close enough to the cliff edge for the really spectacular angles...I'm a coward!

The byway continued for another mile or so and then I took a path across pastures which gave me some lovely views looking down at Calver and Froggatt, northwards towards Hathersage, and across the valley to Froggatt Edge. 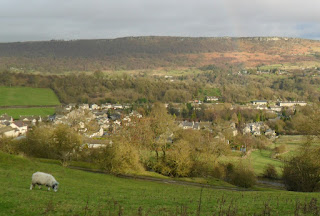 When I got on the bus at Calver I noticed that it had a couple of posters advertising the details of Doncaster's Park & Ride scheme; it must have been used to provide the service at one time.
Posted by Lee Firth at 5:01 PM