Unusually there weren't many people on the 272 bus service to Castleton this morning. The driver was new to the route, and when we got to Bradwell he needed to ask the passengers for directions: since there were only two of us sitting downstairs, and I was at the front of the bus, I volunteered.

Of course it was his first time driving along Bridge Street in the village, which has a very narrow section; here's a short video, not taken by me though.

I have done all of the route of today's walk at various times; some sections in the opposite direction though, but about half of the walk hasn't been featured on the blog yet.

Although it was a lovely sunny day, Castleton was in the shade of the nearby hills when I got off the bus; as it probably is for most of the day at this time of year. I took the footpath across the fields towards Winnats Pass. There were some lovely views; the first photograph was taken from here, and here's another one taken from a few hundred yards further on.

There are some spectacular limestone pinnacles at the sides of Winnats Pass; I took a few photographs, but because the path at the side of the road was in shadow all the way to the summit, none of them was really any good. If ever a place has an appropriate name it's Winnats Pass; the name is a corrupted form of 'Windy Gates' - and that was certainly the case today...the narrow gorge seemed to be acting as a very efficient wind tunnel.

At the summit it was brilliant sunshine and so I took a path across some fields and found a warm, sheltered spot to eat my sandwiches.

After my rest for refreshments I walked for a couple of minutes and then could see the abandoned section of the main road between Sheffield and Chapel-en-le-Frith, caused by the regular landslips that occur on the adjacent hill of Mam Tor. 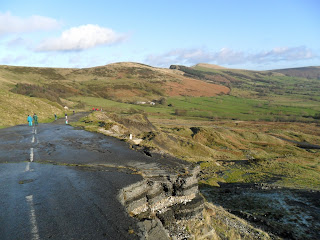 It was then a steady walk down into Castleton; but first I made a short detour to the Odin Mine. The narrow boulder-strewn ravine has always been blocked by vegetation on previous visits; but not today. It was a bit of a challenge...and would no doubt be a great adventure for a young boy.

I fancied some fish and chips when I reached Castleton; but as usual, the queue reached out onto the street, and so I decided that I didn't have time.
Posted by Lee Firth at 5:08 PM