Although today was quite sunny, it was also very windy, and so I altered the original route of my planned walk to keep to low ground as much as possible. Quite a bit of time was spent in the Porter Valley, going all the way downstream to Endcliffe Park - only two or three miles from the city centre.

Yet again the early train to Sheffield was cancelled and so I had to catch the bus. Fortunately I arrived at Sheffield with a few minutes to spare.

The walk started at the Norfolk Arms at Rivelin, no longer a pub now though. I walked a few hundred yards along the road towards Hollow Meadows until I reached a sign for a farm with a name that appealed to me...with my name being Lee. 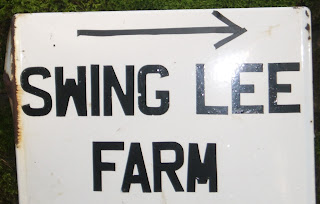 All sorts of images came into my head.

I then entered Wyming Brook Nature Reserve, following the path upstream. After a while the line of the path that I'd chosen became rather overgrown and littered with slippery moss-covered rocks. I was struggling a bit and so headed for higher ground through woodland consisting mainly of silver birch trees, which had trunks which were just the right girth for me to grab hold of and drag myself forwards and upwards.

I soon reached open moorland and took a short detour to photograph the Head Stone, quite an impressive rock. Its location is rather disappointing though and I couldn't find a decent angle to take a picture from.

It wasn't long until I was walking along the path which goes alongside the water conduit which leads to the upper of the three Redmires reservoirs. I sat and ate my sandwiches on a bench right next to a small stone tower which must be something to do with the reservoirs. Whilst I was here a woman passed me with a large black dog which was trotting like a horse.

A short section of quiet road followed and then a concessionary footpath going past some houses and then fields and more short sections of road until I reached the toposcope at the head of the Porter Valley.

This photograph was taken from this area whilst I was walking along Fulwood Lane, looking towards Sheffield.

The rest of the walk was a gentle descent alongside the River Porter, calling en route to Endcliffe Park at the Forge Dam Café where I had an all-day breakfast. I thought it was bit expensive, but the service was pleasant and efficient.

I left the route at the park gates on Eccleshall Road where I caught one of the frequent buses into the city centre. I had a short walk down the hill to the railway station from Arundel Gate though.
Posted by Lee Firth at 5:32 PM