Today I travelled on the new 273 bus service for the first time. It leaves at the same time as the 242 service which it replaces and travels the same route to Fairholmes; but continues on to Castleton.

At Fairholmes I walked southwards along the road which follows the eastern shore of the reservoir. There were several spots where I stopped to take photographs of the marvellous autumnal colours. 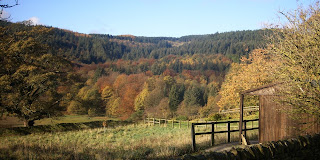 After about a mile I reached the footpath which leads up onto the moors; it is quite steep in places, but not at all difficult. There were stunning views down towards the reservoir and valley from most of this section of the walk. I took many photographs, but I think both my camera and my poor technique somehow didn't do the views justice; and so I haven't included any of them.

I continued along this high level path until I reached the Ladybower Inn; the official beginning of the Snake Pass road. The food smelled delicious and I was certainly tempted, but there were some very smartly-dressed people sitting at the tables outside, and some very nice cars across the road in the parking area; and so I thought the better of it, covered in mud as I was.

By now I was aware that I needed to pee but knew it wasn't far to the Heatherdene car park where there are toilets. I was walking along the road which leads towards Bamford when I saw a toilet block; the toilets were locked though. I noticed that this building was also used to sell fishing permits, and so assumed that these toilets must be for the exclusive use of the anglers, who must be issued with keys.

The car park was less than a hundred yards further on. As in most places in the Peak District that I've visited, the toilets were very impressive, with drinking water supplied and somewhere to wash the mud off your boots. Public toilets are located in most of the larger villages, and at several isolated car parks as well.

The next photograph was taken from near to the car park.

I crossed over the dam wall and took a picture of one of the bell-mouth spillways; according to several online sources the largest in the world. 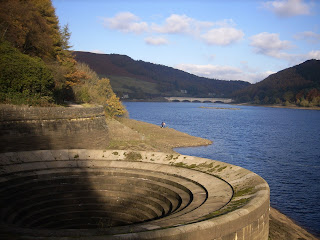 Most of he final part of the walk back to the bus-stop near to Bamford Railway Station was along a minor road and then a short section of the Derwent Valley Heritage Trail. Rather unusually, the bus was over ten minutes late.
Posted by Lee Firth at 5:06 PM