Today the weather was showery and windy, as forecast. This didn't spoil my walk though, it's all part of the outdoors experience. What did spoil my walk though was when the elastic in my underpants snapped, causing me to feel a bit uncomfortable - if I'd had a pair of scissors or a knife in my rucksack I would have cut them free.

I got off the bus at the end of Shatton Lane and walked through the village, seeing it in its entirety for the first time. Just before the deep ford I turned left and walked up the byway  that leads to the transmitter on Shatton Edge. On a much clearer day than today there are gorgeous views from along this part of the route.

A few minutes after passing the transmitter I took the path that leads across Abney Moor, a route I don't remember ever having walked previously. Enjoying the bleakness of the moor and the rushing wind I just wandered aimlessly, following sheep runs and occasionally, footpaths I suppose. 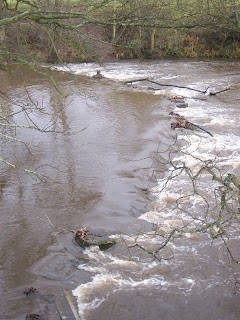 After a while I headed for the highest point and could work out exactly where I was - just above Offerton Hall. I found the path that leads down to the country lane and then descended further across fields towards the River Derwent. I had noticed earlier that all of the becks seemed to be in spate, and when I reached the river, the option of taking the short route back to Hathersage by crossing over the stepping stones wasn't viable at all...as you can see. They were actually several inches under water.

So...I followed the river downstream to Leadmill, then walked across the fields to Hathersage, where I popped into the café for a meal consisting of eggs, sausages and chips. I wasn't that impressed; the service was slow and the portions small. The small portions meant that I didn't have to rush too much in order to make sure that I didn't miss the bus.
Posted by Lee Firth at 4:52 PM