I took the first appropriate bus  to the Peak District from Sheffield this morning, the 272, and got off at Fox House: the 273 left ten minutes earlier but the map I'd taken with me today didn't cover the areas it serves.

I walked down to Grindleford Station at Upper Padley by a slightly different route, which was mostly new to me. Before being prescribed my metformin tablets I would have probably popped in to the Old Station Cafe for one of their massive breakfasts...but now I don't feel hungry all the time and so I had no problem in only stopping to take a photograph. 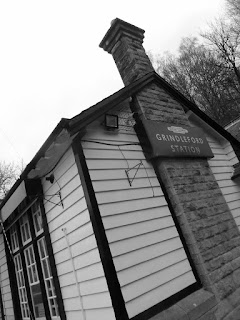 A few minutes later I reached Padley Chapel; there's a nice shelter where I sat and ate my sandwiches. 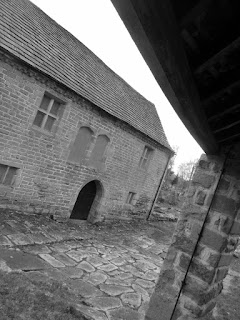 There's some pretty countryside on the walk down to Leadmill; this photograph was taken during one of the short brighter spells during the morning.

After a short walk along the road and then a step climb up a field I reached Hazelford Hall. 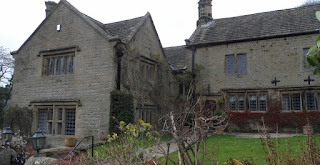 Another short stretch along the road and then I took the footpath down into the valley, walking through a variety of terrain and underfoot conditions until I reached Stoke Ford, a location where five or six ancient footpaths meet. I selected to take the path which leads up to Abney, a route I hadn't taken before...something that is becoming increasingly rare these days. It was easily walkable - but very muddy in places.

The walk along the narrow walled lane up to the moors from Abney is a bit of a slog, not helped by having to get out of the way of motorcyclists on a couple of occasions. I had a treat coming...although I didn't know at the time; I had a choice of footpaths and took one which I've not taken before, I don't know why - I've always been aware of its existence. Well, this path took me right to the edge of the moor, from where I could see right down into Overdale. By this time it was getting quite murky, so I didn't bother getting the camera out...I'll come back here again though because when the sun's out I should get some good photographs of a hidden corner of the Hope Valley.

This path turned out also to be a short cut onto Brough Lane, a byway open to all traffic,  along which I could make good speed down to the bus-stop at Brough; I needn't have bothered though - I had thirty five minutes to wait for the bus.

An uneventful day today, just an enjoyable walk covering about ten miles, in decent weather along a few new stretches of footpath; nothing unusual or unexpected, and certainly nothing potentially very dangerous...unlike yesterday when I went to Buxton Christmas Fair with my friend Justin.