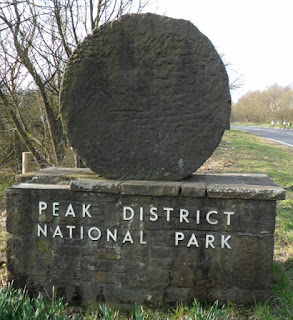 I got off the bus just before the National Park boundary sign and walked down through Blacka Plantation. I had soon escaped from the noise of the quite busy road and was among dappled light, birdsong and the sound of a babbling brook on a pleasantly warm and windless day in early Spring. 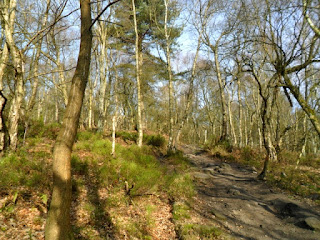 Once I'd cleared this wooded stretch I was walking along undulating tracks and country lanes with panoramic views eastwards towards Totley and various other suburbs of Sheffield.

I actually walked past some outlying farms and houses which are probably part of Totley, possibly a location marked as 'Totley Bents' on the map.

A few minutes later I reached the road that goes to Owler Bar, walked along it for a while and then soon took the footpath which goes around the back of the bus terminus/turnaround  and through Gillfield Wood, I think it's called. Along this section I noticed a couple of benches with names carved into them, and the lettering 'Community 10,000' - it probably refers to a community arts project of some sort; although I can't find any mention of it online.

I ended up walking further east than I had intended; my path wasn't clearly marked, and I arrived at a small car park reserved for wheelchair users at one of the entrances to Holmesfield Park Wood. I soon spotted the fingerpost sign for a footpath which went along the edge of the wood all the way to Holmesfield Common.

I then took the country lane which leads to the hamlet of Horseleygate, taking a bit of a detour down into a small valley and back up through a very tidy mobile homes site in order to avoid walking along a stretch of metalled road.

I then took a short, steep footpath down to the Millthorpe road, crossed it,  and continued down into a very pleasant grassy dale where many yellow, buttercup-like flowers were in bloom.

A short dead-straight stretch of a track called Car Road was next, and then a footpath alongside a stream, gradually walking uphill until I reached bracken moorland and the road quite near to the car park for Shillito Wood.

I walked along the road which leads to the main Baslow road, took a path across more open moorland, crossed another country lane and walked along the track which passes by Wellington's Monument and eventually becomes Bar Road which descends steeply down into Baslow Nether End; where I bought the best ice cream I've tasted in  many years - lemon curd flavour...and I could certainly taste the sharpness of the lemon. It was produced by a local company: Bradwell's of Bradwell.
Posted by Lee Firth at 6:45 PM