After getting off the bus at Bakewell I crossed the road and headed towards the shops. I popped into the small Spa supermarket and bought some chocolate covered raisins, and then went to the toilet - where I had a choice of five doors to enter; Male, Female, Disabled, Family or Traders.

I then left the town, walking over the old bridge over the River Wye, and along Coombs Road. I could have kept walking along the road but took a bit of a detour which meant I had to climb to reach a short section of the Monsal Trail along the old railway embankment: the views were far better though.

I rejoined the road at the end of the Trail, at the viaduct, and continued along Coombs Road; which soon petered out into merely a track. Just beyond the viaduct I noticed a planning application had been pinned to a gatepost explaining that permission had been sought to extend the Monsal Trail to Rowsley.

The track continued for about two miles until I reached Rowsley, going through farmland and alongside a pine plantation. I arrived at the A6 road but only followed it for a few yards until I picked up a path which led across fields to the village, seemingly having to walk right through the gardens of a couple of houses. I was definitely on the path because of the stiles and a conveniently placed bench, but when I arrived at the back street where it came out into the village there was no footpath sign; if I'd been walking in the opposite direction I would not have been quite so confident of it being a right of way.

I briefly called at the Post Office to get a carton of chilled milk which I enjoyed whilst finishing off the chocolate covered raisins; sitting on a bench in the centre of the village, near to the well.

I left the village by taking a path uphill and soon arrived at an interesting piece of topiary, which I had to pass through. 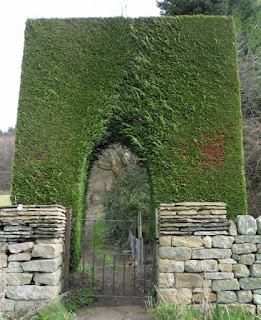 At the top of this path there was a country road which soon became a series of switchbacks through dense woodland; if it wasn't for the trees blocking the view I'm sure this would be a spectacular sight; it was certainly challenging walking this section.

The next section of the walk was fairly level, going across open moorland and fields interspersed with small copses and larger plantations.

There was then another stretch of road I needed to walk along, and then a path across more fields, skirting Matlock Golf Club, and arriving down at Bentley Bridge, about two miles north of Matlock on the Chesterfield Road, just in time for the bus.
Posted by Lee Firth at 6:40 PM