To The West Of Castleton. 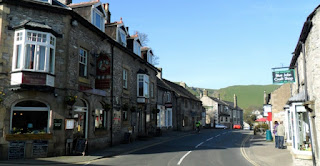 Although the majority of today's walk was to the west of Castleton, I started off by leaving the village in an easterly direction, turning off the main road into the Market Place and then heading up the lane which eventually goes to Bradwell; taking a very circuitous route because the Hope Cement Works is in the way. 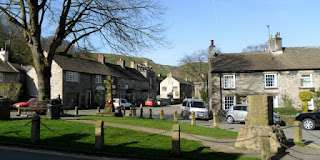 The Market Place is merely a name these days; no market is held here...it is a rather pretty spot though.

The lane out of the village climbed steadily; at one side I could see expansive views of the Hope Valley, and then higher up as the direction switched to be heading towards the south west, Hope Cement Works came into sight - not a pretty sight, but as I was having a brief rest at the roadside, a car stopped not too far away and a man got out and took several photographs and engaged his travelling companion in lively conversation.

I continued along this lane and then took the track which leads to the disused Hollandtwine Mine, where I stopped to read the information board explaining everything about how the site has been restored and the spoil heaps levelled so that the view of Mam Tor is now no longer blocked.

I continued westwards along this track for about a mile until reaching the massive excavated hole of Eldon Hill Quarry, which is currently not in use; stopping briefly to rummage for something in my rucksack and catching sight of about two dozen paragliders hanging in the air above Bradwell Edge. Also when walking along this section I noticed a father and his young son bending down to pick up loose rocks; I surmised they were looking for fossils.

Another short section of road followed and then a path leading downhill and then uphill to Ruhsup Edge Farm, where a bit of help with locating the actual path would have been appreciated.

I was soon walking along the main Chapel-en-le-Frith road, but soon turned off to climb up through access land to reach the footpath which goes along the top of Rushup Edge, and then turned eastwards to return to Castleton. The actual highest point of Rushup Edge, Lord's Seat isn't very impressive at all, but there's a tumulus only a few yards away which you can climb to the top of to enjoy marvellous views of Mam Tor, The Great Ridge and Edale. 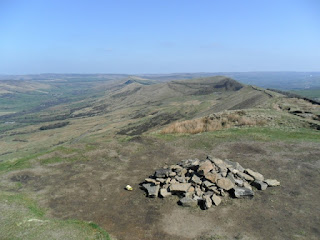 At this point I could make out people walking to the summit of Mam Tor, a very popular activity on a lovely sunny day. A few minutes later, when I took the photograph several dozen people were on the steps, or on the summit. 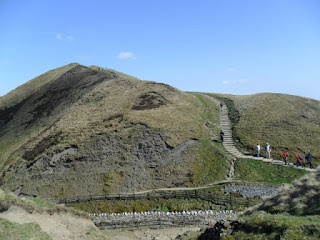 At this point I decided to make my way down to Castleton as quickly as possible and hope to catch the next bus. I had considered walking up to the rim of Winnats Pass for some spectacular views; something I haven't done yet...but it will have to wait until another time.

The quickest route took me down the abandoned road and past the Odin Mine Crushing Circle. 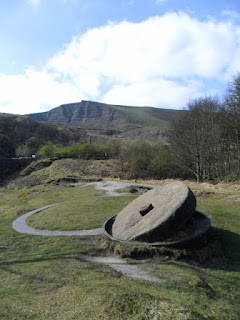 I did arrive back in time for the bus; in fact I had time to pop into the shop and visit the toilets at the bus station.
Posted by Lee Firth at 6:13 PM