Sunshine and showers today - fairly typical for April I should think.

I caught the bus to Brough and walked down the lane towards Aston, but turned off before the village, taking a path that would eventually take me to the summit of Win Hill by a new route to me; the south eastern flank.

I then proceeded westwards, but after a few hundred yards was greeted by an unexpected eyesore: large areas of the lower slopes of Lose Hill had been covered in netting. I suppose it's probably just re-seeding and is only temporary, but why couldn't they use green or transparent netting, instead of white?

The walk to Hope Cross is easy, gently sloping downhill. 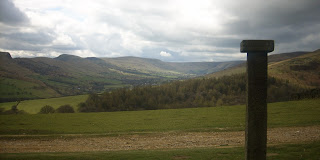 Apart from the last few hundred yards into Hope, this section was the only part of the walk I had done before.

I continued for a few minutes beyond Hope Cross and then took the path down to Edale End and joined the road at Bagshaw Bridge.  After walking along the road for about half a mile I took the path from Normans Farm which leads along the bank of the River Noe - a very pleasant half-an-hour or so.

Because Winnats Pass is closed today for re-surfacing and safety work the Edale to Hope road was quite busy and this somewhat spoiled the final approach into Hope.
Posted by Lee Firth at 5:47 PM