A Visit To Mansfield And Welbeck Abbey

The weather didn't brighten up until mid-afternoon so I went in the car with Siobhan, my support worker, to Mansfield; somewhere I'd not visited in over twenty years. We went in the museum and looked round the charity shops - I bought a couple of shirts for only £2 each.

As forecast, the weather improved during the afternoon and so we called at Welbeck Abbey on the way back to Doncaster. The abbey isn't open to the public, but there's a large garden centre, a farm shop, a café, and an art gallery.

The art gallery is a lovely building, part original and part a re-build by the look of it. There wasn't much on display, mainly modern pieces of jewellery and pottery. We were able to touch some of the exhibits; I particularly liked the feel, weight, texture, and balance of a metallic 'feeling ring' - a term I've never come across before.

I turned round a corner and walked along a corridor and was confronted by a door that wasn't a door at all; I don't know if this was an exhibit, or not....I had to take a photograph though. 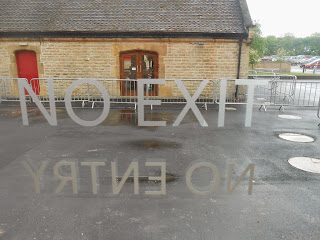 The farm shop was quite large; I bought a couple of rabbit pies. 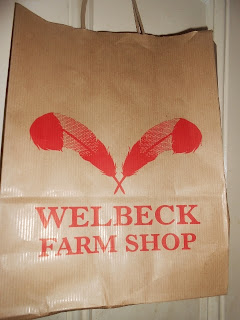 We had a look round the garden centre and craft shops; we could have taken longer but wanted time to linger in the conservatory area of the café where we ate our cream teas. 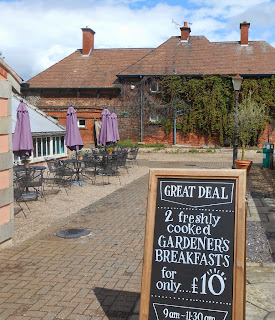 Not a walk at all; but I like to be active on a day out and so must have covered at least a couple of miles...maybe more.
Posted by Lee Firth at 4:20 PM