Another walk with the Doncaster autism group.

The weather was perfect today and it was the best turnout for the walking group so far, twenty two people in total - we didn't all arrive at the same time though; things didn't go exactly to plan.

Because of the difficulty of finding suitable locations to start our walks where people can safely and conveniently park their cars and others can reach on the bus on a Sunday morning, we decided to travel to the start of walks using only cars, and making arrangements for some people, myself included, to be picked up in the town centre.

To begin with everything went well; everyone arrived on time at the pick-up point and seventeen of us travelled down the A1 to arrive at Clumber Park at 10:25.

We had planned to meet the other five walkers, travelling independently because they didn't need to drive through the town centre, in front of the cafe. We had to make our plans in advance because there is no mobile phone signal at Clumber Park - anywhere on the estate. After half an hour, and several dozen frustrating attempts at making calls on our phones someone had to go into the Information Centre and ask to use the landline telephone; she couldn't get through to the mobile number though, so we knew that the others were somewhere nearby...probably inside the park.

After a few minutes of deliberation we decided to set off and walk around the lake in an anti-clockwise direction.

The lakeside walk passed through areas of woodland and open heath.

Twenty minutes later we stopped at an idyllic spot to take some photos of the buildings from where we had set off, now being on the other side of the lake. The photo I've included is the actual view...but obviously none of the walkers are featured in it.

Suddenly one of the children yelled that he had spotted the other group, and by using system of improvised semaphore signalling with our arms which wouldn't have looked out of place in an episode of Monty Python we successfully conveyed the message that they needed to start walking in the direction we were pointing, and that we would wait here for them. Several people were checking their mobile phones...something that continued all day.

The weir at the far end of the lake caught the attention of several people and we stopped there for a few minutes. 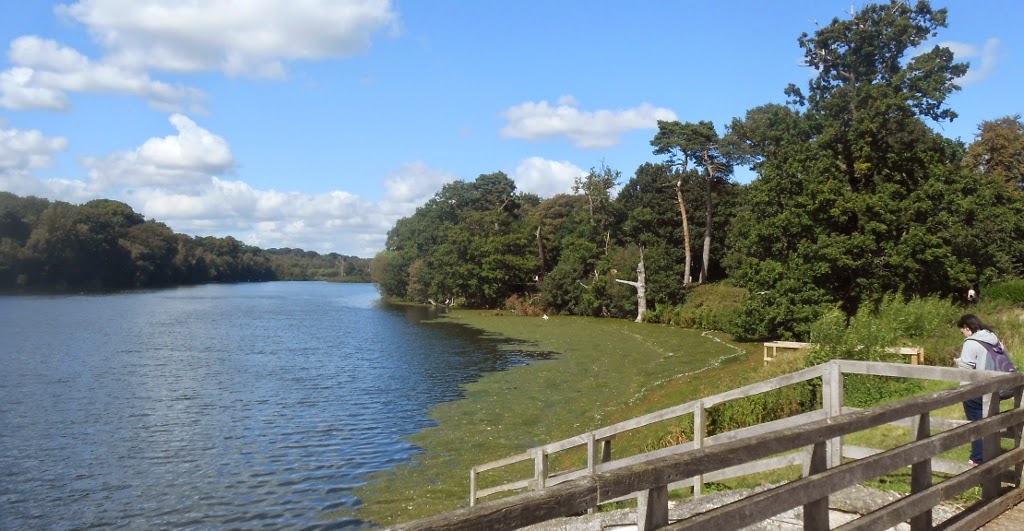 A few yards further on there were refreshments and toilets.

It was very busy, and on our return back to the carpark we got caught up with another group of people, which made photography difficult since I didn't want to inadvertently have them appearing in any shots.

I managed to get a nice shot in front of the chapel though for inclusion on the group's blog.

We arrived back at the cars and then walked to a pleasant grassy area to eat our sandwiches, or have a picnic; some people brought blankets, fold-up tables and coolers...and equipment for ball games. I played a simple game of passing the football with three other people for forty five minutes and ended up exhausted - I needed to go to the cafe for a pot of tea.