Hope, The Great Ridge and Castleton

I got off the bus at Hope and popped in the shop and then briefly visited the toilet. As  you can see, there's a lovely floral display covering the entire parade of shops on the main road. 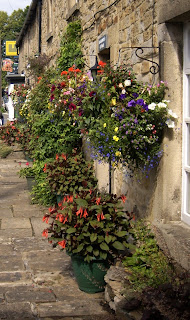 I set off in a northerly direction to reach the Edale road after about a quarter of a mile. A few hundred yards later I turned left along a lane which passed a very swish hotel/spa. Soon after this point I was walking across meadows with stunning views of Lose Hill and the eastern end of Edale: by the way, Edale is both the name of the valley and the name of the only village in the valley.

The next location marked on the map was the information shelter at Edale End, which I didn't stop to visit. Next up was a complicated series of stiles and gates where the footpath was routed around a farm.

I then walked along the road for about half a mile; in places it was quite dangerous, but the views of the Great Ridge were impressive, even though the sky was clouding over by now.

The path across the field towards Edale was easy going and very pleasant; I turned off before reaching the village though and headed for the most direct route to the lowest point of the ridge, Hollins Cross.

The climb up was quite strenuous but the most difficult thing for me was the makeshift path that had been constructed out of small boulders.

At Hollins Cross I had a rest and enjoyed the view back towards Edale from where I'd come, then moved a few yards and had another rest to enjoy the view of Castleton and the Hope Valley.

This is the view looking east along the Hope Valley:

Finally I walked across the fields to Castleton to arrive just as it started raining. As at Hope there were flowers everywhere; this is a photograph of some tea rooms in the village. 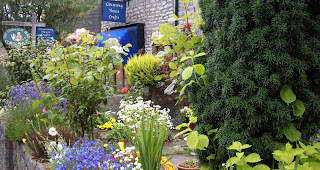