Today has been a bit of a reconnaissance mission for a possible future walk with Chris and Simon from Leeds. They're both interested in railways, and there's certainly a lot of railway structures to look at in this area.

On Eccleshall Road a rather aggressive, and possibly drunk, or mentally ill, man got on the bus with two large dogs that he was struggling to control. He was soon arguing with the other passengers, myself included. I told him in a polite, yet firm manner that if he couldn't control the dogs, he should leave the bus. He threatened me, but nothing happened.  I think I felt a bit sorry for him; he looked like an unemployed Jimmie Savile impersonator.

I got off the bus at the stop on the main road for King Sterndale, but crossed the road and walked in the other direction, up a track, leading towards Pictor Hall and Tim Lodge.

I continued walking westwards, then north-westwards until I was quite near to an industrial estate on the outskirts of Buxton. I then turned to the right and headed straight for Tunstead Quarry. The photograph was taken just a couple of hundred yards before I reached the quarry; it is so well screened from this direction that you don't actually see it until you are there. The raised ground in the photograph is a berm, directly behind it is the quarry and its workings...and they're massive.

The footpath took me right through the quarry, passing by much of the equipment at very close range...I think they do guided tours. One piece of equipment drew my attention; I think it's so that tanker drivers can climb on top of their vehicles to inspect them before they go out onto the roads.

After passing through the quarry workings there are a couple of rickety footbridges which cross over two parallel railway lines. I saw of couple of shunters in operation: in the photograph it's hard to tell which way the shunter's travelling. 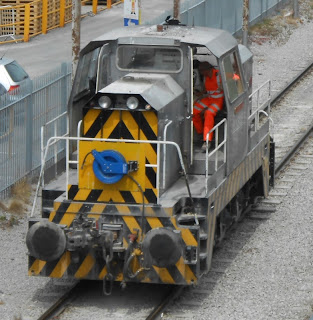 All along the footpath through the quarry, and areas where the quarry previously operated, there are numerous concrete blasting shelters. These were constructed for the safety of the quarrymen, not to protect modern hikers. There are signs explaining the warning sirens [and red flags too I think] when blasting occurs, but all the shelters are open and easily accessible if you're a bit nervous I suppose. I don't think the footpath needs to be even temporarily closed at any time though. 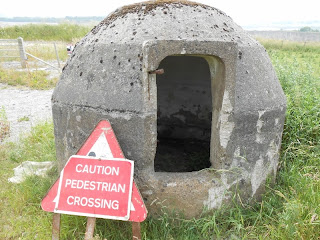 It's a steep zig-zagging climb out of the bottom of the valley where the quarry and the railway lines are, then an easy walk along shallow grassy valleys and farm tracks to reach the road just to the south of Wormhill, then there's a path which seems to go diagonally across someone's lawn; the woman who lived there was hanging out her washing and acknowledged my presence there. I did divert by a few yards though, not wanting to get tangled up in her laundry.

This path continued across fields and then joined the road which leads down to Miller's Dale, where I bought an ice cream at the old station building on the Monsal Trail.

I walked down into the village and caught the bus on the main road, passing under two bridges and the two famous railway viaducts at Miller's Dale. I caught the 66 Chesterfield bus; the Sheffield bus was waiting for us at Tideswell, as it always does at this time.