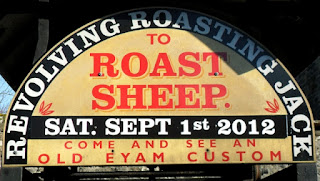 I don't know if there were any organised orienteering or fell-running events in the White Peak area today, but I saw two organised groups; one as I was travelling on the bus through Grindleford, and the other, just after I'd started walking at Eyam.

I got off the bus, popped in the shop and then took a photograph of the church; the lighting conditions were perfect. 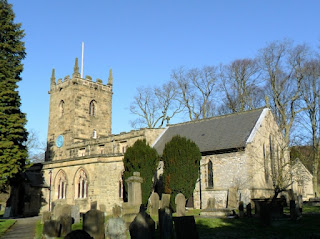 There's an impressive Saxon cross in the churchyard; but after only a cursory look, I couldn't find it.

I took a footpath through a small housing estate and soon reached a well-maintained track known as 'Tideswell Lane.' After a few minutes I was in open countryside and found somewhere comfortable to eat my sandwiches. Choosing  a 'bridleway open to all traffic' to sit down for a few minutes turned out to be a mistake though...when a convoy of two dozen noisy motorbikes passed by.

The lane leads to the hamlet of Housley: from here I walked along the road until I reached a path across fields to Wardlow.

There was another stretch of road to follow and then a footpath which led up onto Longstone Moor. The moor is fairly flat and the path is grassy, meaning that you can make quick progress if required;  I lingered though, to take in the views.

Another short stretch of road followed, and then the descent down into Coombs Dale - the nearest major limestone dale to Sheffield I should think.

After walking along the entire length of the dale it was then only a short walk to Calver to catch the bus, which was nearly full.
Posted by Lee Firth at 5:16 PM